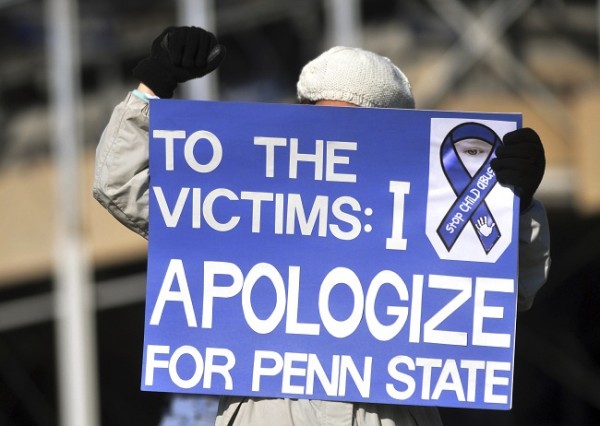 Now 18-years-old, “Victim 1,” will reveal his identity on the day of the book’s release in an interview with ABC’s Chris Cuomo.
(Photo : Reuters)

The witness credited with launching an investigation against convicted child molester former Penn State football coach Jerry Sandusky will release a tell-all book at the end of October the book's publisher announced Sept. 27. "Victim 1," as the man is referred to in court papers, will also soon reveal his identity, and give his first media interview to ABC.

Publisher Ballantine Bantam Dell said that man's account, "Silent No More: Victim-1's Fight for Justice Against Jerry Sandusky," is coming out Oct. 23. The memoir will be co-written by the victim's mother and psychologist, and "will share how he survived years of shame and secrecy, harassment and accusation, before reporting Sandusky's actions to the authorities, and will offer a hopeful and inspiring message for victims of abuse," Ballantine announced.

Now 18-years-old, "Victim 1," will reveal his identity on the day of the book's release in an interview with ABC's Chris Cuomo.

Financial details for the book have not been commented on. But publisher Ballantine, an imprint of Random House Inc., plans a donation to a charity for victims of child abuse.

The New York Post reported Sept. 20 that ABC had landed the interview with "Victim 1."

Sandusky was convicted in June of dozens of criminal counts of sexual abuse of 10 boys on and off campus. At 68-years-old, he currently awaits sentencing, which likely will send him to prison for the rest of his life.

In November 2009 "Victim 1" and his mother reported Sandusky to the boy's high school and the Clinton County child protective agency. Their complaint triggered a stat-wide investigation that resulted last year in criminal charges against Sandusky and against two university officials accused of failing to report suspected child abuse and of lying to a grand jury.

"Victim 1" says he met Sandusky about eight years ago, when he was 11, and was a first-year participant in a camp sponsored by Sandusky's charity, The Second Mile, according to a lawsuit that "Victim 1" filed against Penn State. In his second year, he drew Sandusky's attention and accepted invitations to spend nights at the coach's State College home and to attend professional sports events, the lawsuit said.

Sandusky was accused of fondling the boy and performing oral sex on him multiple times over a period of several years.

Sandusky didn't testify at trial, but is maintaining his innocence. He has acknowledged he showered with boys, but has strongly denied molesting them. His wife, Dottie Sandusky, testified that she never saw him doing anything inappropriate with boys he took to their home.

"Victim 1" first alerted authorities in 2008 and helped launch the investigation leading to Sandusky's conviction in June on 45 counts of child sexual abuse. Prosecutors said some of the assaults took place on the Penn State campus. Sandusky is scheduled to be sentenced next month and is likely to receive a sentence that will keep him in prison for life.

"Victim 1" testified for the prosecution that Sandusky approached him through a summer camp for youth sponsored by The Second Mile, a charity for at-risk youth that the former coach had founded. Their initial contacts consisted of football games and swimming, and Sandusky would attend the boy's wrestling tournaments.

"Victim 1" said physical contact began with a hand on his leg in the car, and he began spending nights at the Sandusky home in State College, about 30 miles from his own home in Lock Haven.

Kissing and back rubbing during those overnight visits, when he was in his early teens, progressed to oral sex, he testified, sobbing. He said Sandusky eventually told him: "It's your turn."

He told jurors his own behavior worsened, going from a well-behaved child to fights with relatives and bed wetting. Soon after the abuse began, his grades deteriorated. After "Victim 1" began trying to avoid Sandusky, he asked his mother about websites for child molesters, "to see if Jerry was on there," he testified.

His mother set up a meeting with school guidance counselors, a process that led to the opening of a police investigation and produced criminal charges against Sandusky in November.

From his cell at the Centre County Correctional Facility, Sandusky is writing his own "tell-all" book to occupy his time with the help of his wife, Dottie. In fact, Dottie has been sending him so much correspondence that she's had her privileges revoked by prison officials.

While Sandusky might've remained silent throughout the trial, his attorney, Joe Amendola, says he had been looking forward taking the stand to address the accusations against him. However, he never got the chance, because his adopted son Matt came forward with his own allegations of abuse at the last minute. Amendola expects Sandusky to speak at his sentencing, however.

"He wants everyone to know that. He had looked forward to testifying at his trial, and because of unforeseen circumstances [allegations of abuse by his adopted son, Matt Sandusky], that didn't happen," Amendola said. "Jerry views his sentencing as an opportunity for him to tell his side of this.

Of course, if the book gets written and published, there's likely to be some invocation of the infamous Son of Sam law against his profiting from it. The law enables a state to use the proceeds a criminal earns from recounting his or her crime in a book, movie, television show, or other depiction. The laws are named after David Berkowitz; a New York serial killer who left a note signed "Son of Sam" at the scene of one of his crimes.

If Sandusky is allowed to write this book, it will be his second. His first was published in 2001 and bears the now-significant title "Touched: The Jerry Sandusky Story." The book is about the Second Mile charity he founded for at-risk youth, which prosecutors at his trial said he used to find his victims.