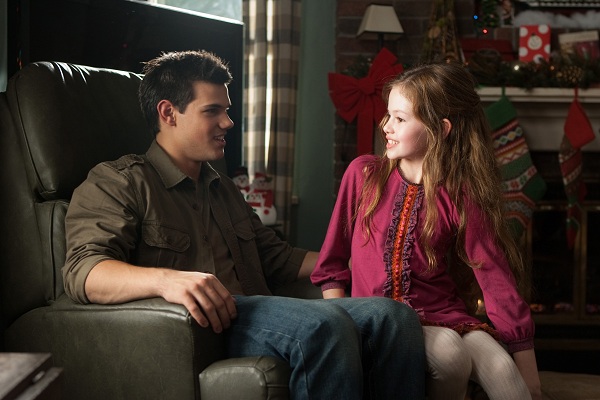 Fans are excited but sad to see "Breaking Dawn Part 2." The epic finale is the last movie in "The Twilight Saga," so it's a bittersweet moment, even for the cast.

However, there might be hope that "Twilight" will continue.

According to The Guardian Express newspaper, there is a chance that the series will not end with BD Part 2."

"On January 16, 2012, National Post reported that Lions Gage's chief executive Jon Feltheimer, will likely continue past the last book of the series. The decision seems quite logical, especially since interest in the series does not appear to have waned and in fact statistics indicate that the saga enjoys a growing audience that spans across a large demographic network."

The most logical angle that the film would take is continuing the relationship between Edward and Bella's daughter Renesmee, and their werewolf friend Jacob.

"The logic here seems quite palpable, especially since "Breaking Dawn Part 2″ is primarily about saving Renesmee from the wrath of Volturi, the ancient vampire council," The Guardian reported.

In the "Breaking Dawn Part 2" novel, the Denali, Egyptian, Irish, Amazon, Romanian Coven, and others come to defend the Cullens after Irina reported to the ruling vampire class known as the Volturi that the Cullens (Bella and Edward) created an immortal child, half-vampire, half-human Renesmee (played by Mackenzie Foy). Due to her hatred with Bella (played by Kristen Stewart) because of Bella's relationship with the wolves as well as the unfulfilled revenge of her mate Laurent, she betrayed her sisters and her allies. The movie also centers on Bella's new transformation as a new-born (new vampire).

Those are the key points of the movie, but for the book as a whole, it was significant the Jacob (Taylor Lautner) imprinted on Renesmee, which was shown in "Breaking Dawn Part 1."

Many fans would love to see their relationship continue, and also see their favorite two vampires again.

In other "BD Part 2" news, Stewart dished on the new secret ending that has been added to the film.

Earlier in the year, Hollywood Life announced that the final third of the movie will not be one that's in the book. It will be a brand new sequence.

The website reported that the new sequence was "dreamed up by [author] Stephanie Meyer and longtime screenwriter Melissa Rosenberg one night over dinner" that is much different from the book version.

"It's so good," Stewart told MTV News when asked for her thoughts on seeing a finished cut. "It's good, it's really weird. I think everyone expects that but I'm really proud of Bill [Condon] and I'm really happy with how it closes [the franchise]. It's a lot to take."

MTV News asked if the ending was a proper send-off to the franchise and its beloved characters.

"Yes, I think so," she said. "I hope not everyone knows exactly how that goes down. I think maybe they do, but even if you do know what happens, the end throws you for a loop, even if you're expecting it."

Robert Pattinson, who plays Edward in all the films, said back in August, ""When I first read the script, I got to that part and was like, 'What?'" Pattinson told Entertainment Weekly. "And then I had to go back a page."

"It does it a serious justice," said Pattinson.

It was recently revealed that Summit will be screening all of the films as part of a movie marathon on Nov.15, one day before "Breaking Dawn Part 2" comes out in theaters.

According to Zap2it, Summit plans to release the newest film beginning with 10 p.m. screenings on Nov. 15 at some theaters. Everywhere else, "Breaking Dawn Part 2" will debut the following day.