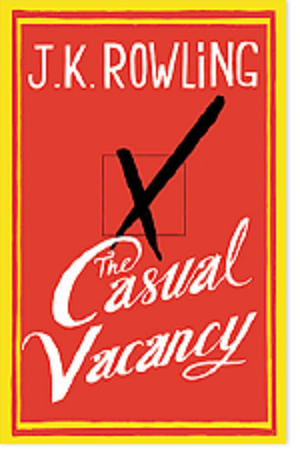 "The Casual Vacancy" tops charts even though it got mixed reviews of its contents.
(Photo : Barnes & Nobles)

Even though somewhat controversial, J.K. Rowling's new novel jumps to the number one spot on USA Today's bestseller list.

"The Casual Vacancy," which was published on Sept. 27, bumps the popular "Fifty Shades of Grey" trilogy by E.L. James, which is something that seems hard to do ever since the trilogy took over.

According to Freep.com, Michael Pietsch, executive vice president and publisher of Little, Brown, Rowling's publisher, said Wednesday that "The Casual Vacancy has exceeded our expectations in its first six days in stores, selling 375,000 copies in all formats. We believe it is on track to become the year's best-selling novel in hardcover."

Rowling has topped book charts with her latest novel.

According to the HollywoodReporter, Rowling's first adult novel sold 124,603 copies in the U.K. in its first week and it take the top spot on the fiction chart.

"J.K. Rowling's U.K. sales to date are of a value in excess of £238 million ($383 million), making her by far the highest-selling author in the U.K. since our records began," a Nielsen BookScan spokesman told the Guardian.

According to USAToday, Rowling is "kind of review-proof," says Sara Nelson, editorial director of books and Kindle for Amazon.com, who's not surprised at Rowling's top ranking given the strong pre-orders over the past few weeks.

"The Casual Vacancy," published by Little, Brown and Company, is described:

When Barry Fairweather dies unexpectedly in his early forties, the little town of Pagford is left in shock.

Pagford is, seemingly, an English idyll, with a cobbled market square and an ancient abbey, but what lies behind the pretty façade is a town at war.

And the empty seat left by Barry on the town's council soon becomes the catalyst for the biggest war the town has yet seen. Who will triumph in an election fraught with passion, duplicity and unexpected revelations?

The 512-page book takes on prostitution, drug use and class, which results in mixed reviews and criticism. Many call it a "dark tale" and "gritty."

The "Harry Potter" series and "Fifty Shades" always had some healthy competition.

"Fifty Shades of Grey" surpassed the "Harry Potter" series as the fastest seller of all-time.

"I haven't [read 50 Shades of Grey], have you?" Rowling told an interviewer from The Guardian back in September, according to MovieLine, adding, "Well, if I'm truthful, it's because I promised by editor I wouldn't."

She quickly added that she was joking, but her editor did say, "Well, don't read it," she said. Asked further if she thought she was "missing out" on something, Rowling said, "Not wildly, no," but added, "It could be amazing, but no I haven't read it."

"The Casual Vacancy" has gotten some good reviews:

"This is definitely not a book for children: suicide, rape, heroin addiction, beatings and thoughts of patricide percolate through its pages; there is a sex scene set in a cemetery, a grotesque description of a used condom ('glistening in the grass beside her feet, like the gossamer cocoon of some huge grub') and alarming scenes of violent domestic abuse." - Michiko Kakutani, New York Times

One "Harry Potter fan," Marie Malazarte, 30, a program assistant at the University of Central Florida College of Nursing, says the new novel "is dark and bleak, without the sense of hope or wonder" in Potter, according to Freep. Nevertheless, she "devoured" it last weekend.

Have you read "The Casual Vacancy" yet? Let us know in the comment box below!