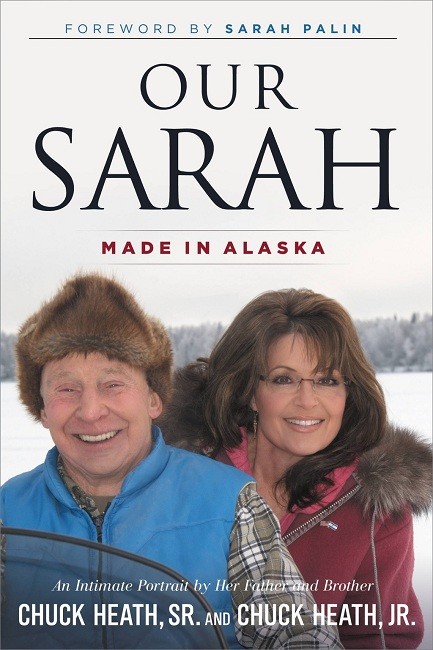 “When Sarah was born she was round and pink with a shock of black hair. Dad commented that she looked like a bulldog,” write the Heaths.
(Photo : Center Street )

On the cusp of Sarah Palin's announcement that she's in the middle of writing a fitness book, news comes today that more of the family is ready to cash in on the one-time vice presidential nominee's celebrity. Chuck Heath and Chuck Heath, Jr. - Palin's father and brother, who are, somewhat confusingly not the same person - have written "Our Sarah: Made in Alaska," available now.

A family memoir about the future conservative, the book takes on the unenviable task of showing how Palin has lead a perfect life. Anyone who says she's done anything wrong is mistaken, according to the Heaths.

Palin wasn't always a "mama grizzly." In fact, she used to be a canine. "When Sarah was born she was round and pink with a shock of black hair. Dad commented that she looked like a bulldog."

She didn't always heap scorn on news outlets. Contrary to popular opinion, she can, and does read newspapers. "When she was in elementary school, Dad would bring in the newspaper and take out the sports section. . . Sarah was busy reading the front-page articles about world events."

Palin's skills on the basketball court revealed the kind of politician she'd later be. "Her aggressive style of play more than made up for her lack of size and shooting ability. She simply outhustled her opponents and wore them down."

In Palin's 2008 debate with Vice President Joe Biden, she wasn't underprepared or inexperienced, her campaign aides tried to "micromanage her responses"- the same Republican aides who blamed her later McCain losing the election. "All those times they mismanaged Sarah in the campaign were twisted afterward into evidence that she was indifferent, uninformed and disinterested. . . They couldn't bear the thought of acknowledging that she had political instincts at least equal to their own."

Palin understands and supports the message in the book. "Having written books of my own, I know how exhausting producing a manuscript can be. . . I hope you'll be inspired by their stories and by the warm Alaskan spirit they reflect."

Reviews have not been kind to the book.

"I spent five minutes riffling through these pages. Nothing more than a hagiography of their famous relative who's quickly losing her luster. This 'book' is only for those who really, truly, desperately want a few more factoids about this former GOP woman," said one Amazon user.

The negative response has of course drawn out Palin's drone support en mass. Sites like Conservatives4Palin and SarahPalinInformation are asking conservatives to troll book review websites to stick up for Palin.

"Won't you consider leaving your mark for all to see? This is yet another way to help Governor Palin and to stand up for the truth. The critics, most of whom, I'd venture to say, have not even read the book, are counting on us to remain silent while they loudly proclaim falsehoods and discourage others from reading the true account of Governor Palin's life and character. Let's meet them where they are," said Conservatives4Palin.com.

"Please go to the 'Our Sarah: Made in Alaska' page at Amazon, Barnes & Noble, Goodreads, and any other place you find that allows a comment or review. I've already done the same. Standing up for Governor Palin is what we do, and this is just another way to accomplish that. Our work continues. Can the Palins and Heaths count on you?"

Even out of public office for going on three years, sounds like some fans just aren't ready to let go of Palin. But they shouldn't feel too discouraged. As she divulged recently in an interview with Extra, Palin might still consider running for president. "I don't know. I'm not sure what the future holds," she said. "Que sera sera," she added.