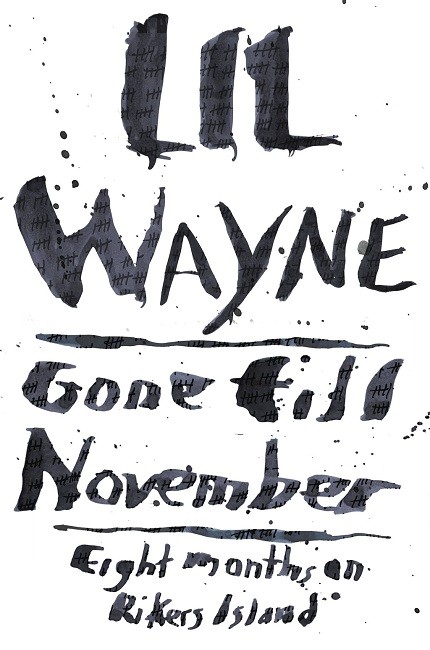 Out May 14, 2013, the memoir is “Based on diaries rapper Lil Wayne kept while serving time on Rikers Island," says the book's publisher.
(Photo : Grand Central)

The nation may be pondering who will rule the country for the next four years, but we've got a more pressing question than who's winning in the presidential polls right now: Will Lil Wayne win next year's National Book Award?

At 28-years-old, the asphalt-voiced rapper has already checked off more bucket list items than most get to experience in a lifetime. He's won a Grammy, surpassed Elvis's record of songs on the top 100 chart, and sold millions of albums. And now it looks like Wheezy is ready to take a crack at the memoir game.

Following a performance in July 2007, Wayne was arrested in New York City for criminal possession of marijuana and a firearm. On Oct. 22, 2009, Lil Wayne pleaded guilty to attempted criminal possession of a weapon. On March 8, 2010, Lil Wayne was sentenced to a year in prison, which he served in Rikers Island. His lawyer said the rapper expected to be held in protective custody, separated from other prisoners.

In April 2010, Lil Wayne's friends created a website, Weezy Thanx You, which publishes letters written by Wayne in prison, and now acts as his blog. The first letter posted, titled Gone 'til November" will also serve as the name of Wayne's upcoming memoir about his experiences while in prison.

Out May 14, 2013, the memoir is "Based on diaries rapper Lil Wayne kept while serving time on Rikers Island, GONE TILL NOVEMBER offers fans their first real chance to get inside the enigmatic mind of the biggest name in hip hop," said the book's publisher Grand Central.

"Selling out stadiums, topping album sales charts, and selling millions of albums have brought Lil Wayne, one of hip-hop's biggest acts, incredible highs. But these huge successes were accompanied by dark lows, resulting in a gun charge that landed him in Rikers Island Penitentiary for a year (of which he served 8 months). While there, he kept remarkably detailed journals of his thoughts, his feelings, the strange and colorful people he met, his plans, his family, his children, his past, present and future. GONE TILL NOVEMBER is a highly compelling internal monologue that is as relatable as it is unique to Wayne. It's an amazing narrative that will be a must-have for his legions of fans."

Wayne is said to have written every day of his incarceration, he claims corresponding to fans through letters is much of what kept him sane. While we can certainly expect some elastic, deft prose from the lauded wordsmith of such hits as "A Milli," we may also get a surprisingly candid look at the artist if the diary entries posted to his blog are any indication of what's to come.

"Hello world... I'm good. Counting the days and still smiling. Most of those smiles come from hearing my kids' voices over the phone. The others come from reading fan mail. Let me just say that I have the best fans in the world! The devotion, dedication, support, love, and most of all, prayers are simply the best. I never imagined that I could have such an impact on people's lives. Because of this, I vow to be a bit more careful of what I say.

So I've been writing and let me be the first to tell you that the lyrics that I'm writing are... well there's no word that I can think of that properly defines them. Amazing would be too typical and perfect would be unfair. I listen to the radio sometimes, emphasis on sometimes, and I hear the new music. I like some. I applaud my Young Money family for what they're doing. As I'm not surprised. This is what we're supposed to do. Congrats to Drake and Nicki for all their recent success. Those 2 are going to have me retiring early. I love my team. Much love to Tez and Mack. I know that people are inquisitive of what I do all day, so here goes. I wake up around 11AM. Have some coffee. Call my kids, and my wonderful mother. I then shower up. Read fan mail. Have lunch. Back on the phone. Read a book or write some thoughts down. Have dinner. Phone. Pushups. Then I listen to ESPN on the radio. Read the bible, then sleep. That's my day."