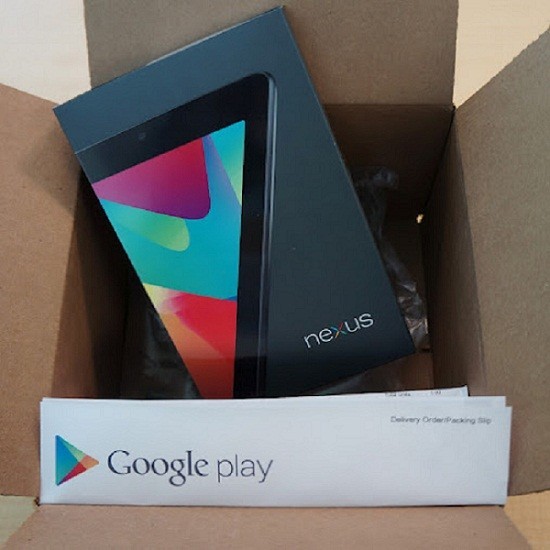 Rumors began swirling around the web a week ago of Google's intentions to release a 32GB version of its Nexus 7 tablet. While the company hasn't commented, numerous sources have all but confirmed we'll see a slew of new releases from Google at its Oct. 29 event, including a 32GB Nexus 7 at $249, according to The Verge.

A person claiming to have already received the 32GB Nexus 7 sent pictures of the device, and its receipt, as well as a 3-minute hands-on video review of the tablet with the description "proof of existence."

See purported pictures of the device and its receipt here.

If the evidence submitted to The Verge is legitimate, the 32GB version of the Nexus 7 will cost just under $250 - the same cost as the current 16GB model. According to The Verge, the 32GB Nexus 7 will be sold at Staples starting on Oct. 29, the 16GB model will be offered at a reduced price of $199.00, and Staples will no longer offer the 8GB model.

The Next Web said it learned of the new 10-inch tablet from an unnamed source that was familiar with an internal Google video describing new products and software to be launched at the Oct. 29 event in New York City.

Google, of course, has yet to comment on any of this. However, the company did send out invitations to press last week for an Oct. 29 unveiling event that read simply, "The playground is open," implying numerous possibilities.

Google is reported to finally be revealing the 32GB Nexus 7 Oct. 29, according to The Next web. In addition to the new standard model, the website also claims there will also be a HSPA+ (3G) model.

Several sites had previously reported that a cheaper Nexus 7 was planned for release in the U.K. and U.S. before Christmas, according to a retailer's ad.

TeckComesFirst reported that a U.K retailer, Argos, has advertised a 32GB version of the Nexus 7 in its holiday gift guide. The snippet from the purported holiday gift guide shows a 32GB ASUS-made Nexus 7 priced at £199.99 (about $323).

"In the US, several leaks have already suggested that the 32GB device will be available for around $250," reports ZDNet. "One US Staples Advantage promo was spotted by self-confessed 'Google/Android fanatic' Joe Sanchez, who managed to take a screenshot of retailer's online listing for the device before the page was removed."

The Nexus-brand tablets expected to be released by Google will compete directly with Apple's iPad Mini, and Amazon's Kindle Fire HD. And while the tablets are dwarfed in size by the Microsoft Surface's 10-inches, both tablets are expected to be sold well-under the $499 price point.

Although the machines are not as powerful or bulky as the full-sized iPad and the Microsoft Surface, many consumers have opted for 7-inch tablets due to concerns over portability and pricing.

According to a recent report from Android Central, it appears that the 32GB Nexus 7 will be available at a price of $249, and will most likely be launched on Oct. 29, the date on which Google has scheduled an event in New York.

"We all know there's a 32-gigabyte Nexus 7 coming down the pike -- very possibly at the Oct. 29 event in New York City. And the box of one apparently has made its way into our forums. We've got one member, KidCuda, saying it's ringing up at $249, which is the current price of the 16GB Nexus 7," reported the website.

A member of the Android Central forum, the highly credibly named Stonerman34, leaked the information that the Nexus 7 has a release date of Oct. 29.

Further evidence of a Oct. 29 release date comes via Droid-Life, who claim a reader "took the item number that leaked over the last week (#100604), contacted their sales department, and was able to purchase the [32GB Nexus 7]."

The reader was then called by Staples who said they had to cancel his order due to contract details with Google, and he was told that he could re-order on Oct. 29.