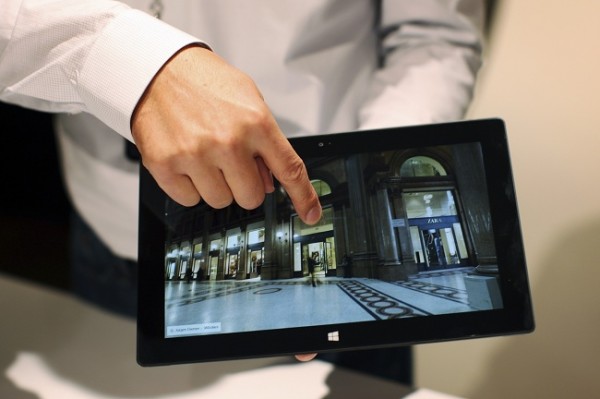 Microsoft’s roll of the dice with Windows 8 is a direly necessary one if the company wants to stay relevant in a multi-screen world, say analysts at Gartner.
(Photo : Reuters)

Microsoft may have sold its new Windows 8 based on the premise that the operating system was user-friendly, and simple to use, but as more and more try out the new OS for themselves, early users of Microsoft's Surface RT tablets running Windows 8, are telling a different story, and are finding the new OS difficult to navigate, according to ComputerWorld.

Users are apparently finding the touch interface in Windows 8 - perhaps its most touted feature - frustrating and confusing to use on Microsoft's Surface RT, and many are opting to use the device's keyboard, which costs an extra $100, instead, according to industry experts.

"It does take a bit of time to learn your way around the OS," said a recent Surface RT buyer from Bloomington, Ind., useing the handle "hans030390" in an Anandtech forum. "A lot of the touch gestures and operations are different than what you'd expect if coming from iOS or Android. But once you get used to them they work really, really well!"

"It's a bit tricky navigating around in the desktop mode with touch ... If you have the Touch Cover, it's a non-issue thanks to the tiny track pad," Hans added.

Many said that workplaces need to plan to train traditional Windows desktop users to use the Windows 8 touch input, whether the OS is used on the Surface RT, the Surface Pro tablet that's less than three months away, or on Windows 8 and Windows RT tablets made by third party manufacturers.

"Plenty of people who are Windows lovers ... will say 'Oh, this is just Windows on a tablet' and will be frustrated," cautions Karl Volkman, chief technology officer at SRV Network, a Chicago IT services provider with 200 small and mid-size business customers. "I myself have a lot of frustrations with the interface. There's a lot of swiping through to find tiles."

Windows 8's "revolutionary" interface does away with the Windows menus of years past. Instead, Windows 8 users employ tiles, and must remember where a tile is located, and its name to find their work, Volkman added. Creating shortcuts can also add confusion, he said.

According to Volkman, adding a Touch Cover or Type Cover to a Windows RT tablet could also confuse new buyers because they may start to treat it as a laptop instead of as a tablet with touch gestures.

"Any tablet with an external keyboard throws people off, partly because of the fact that Windows and Microsoft have driven innate behaviors that people have done for years withkeyboards and mice," Volkman said.

Volkman advises users to avoid the attachable keyboard at first. "The best way to learn the Windows tablet is to not use the [physical] keyboard for a while, and just use the touchscreen," he said.

Microsoft has done extensive research to determine the difficulty average users will face in navigating through Windows 8, said a company spokesman who spoke to ComputerWorld.

The company studied how users reacted when trying to figure out the new OS on their own, when given hours of training, and everything in between, spokesman Jordan Guthmann said.

"In the end, the sweet spot was to show them some basic concepts [such swipe from the right for functions] and people found it enjoyable and easy to discover things on their own from there," said Guthmann.

"There will clearly be a training and adjustment period with the Windows 8 interface," commented Jack Gold, an analyst at J. Gold Associates. "It is different enough so that if you are a long time Windows user, you will have to re-learn how to interact with the device." Gold predicts it could take up to two weeks for many users to become proficient in using the new interface, possibly longer if previous Windows-based apps that a user is familiar with are not optimized for a touch interface.

Volkman and many other experts recommend that workplaces skip the Windows RT tablets in favor of Windows 8-based tablets or the Surface Pro when it ships.

"Consumers will expect something that it doesn't really deliver," Sarah Rotman Epps, an analyst with Forrester Research, said in an interview. "My view is that Windows RT is not really going to be satisfying to consumers," she added.

Volkman also recommends that his clients wait for a Windows 8 tablet that has "full bore Office" instead of the Home and Student version now shipping with Surface RT.

"Demand for Windows 8 will be driven by existing Office apps. Having full-fledged Windows all the way up, from smartphones to tablets to workstations [means that you] don't have to wait for a software provider to rewrite their entire system for each device," Volkman said.