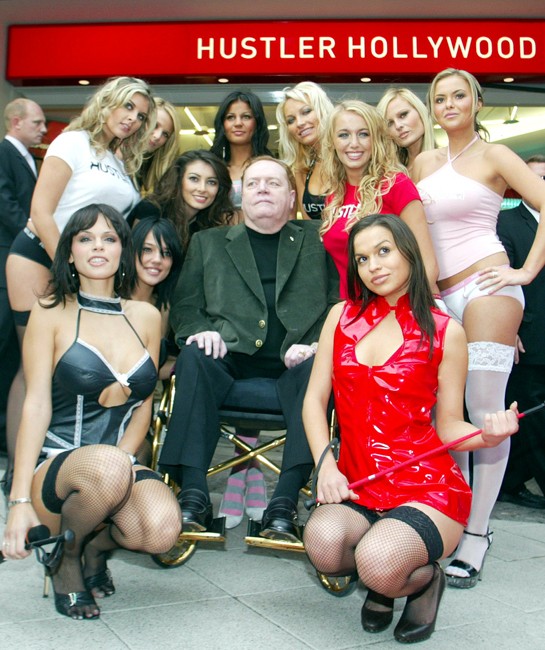 Models pose in lingerie with Larry Flynt at the opening of the first UK Hustler store.
(Photo : Reuters)

Free speech activist, author, and publisher of Hustler magazine, Larry Flynt is offering U.S. Senate candidate Richard Mourdock $1 million if the Republican can provide "proof" to substantiate his statement that "even when life begins in that horrible situation of rape, that is something that God intended to happen."

Flynt has a storied history of making such offers to politicians. Last year, Flynt targeted Texas Gov. Rick Perry, then a Republican candidate for president. Flynt offered $1 million to anyone with proof of "intimate relations" with Perry. And in September he made a similar $1 million offer in full-page ads in USA Today and The Washington Post to anyone willing to release Mitt Romney's tax returns, "and/or details of his offshore assets, bank accounts and business partnerships."

Flynt's challenge was issued via a paid advertisement that he placed in the Nov.1 print edition of The Indianapolis Star. Mourdock is running for senator in the state.

In a statement issued from his campaign Nov. 1, Mourdock continued to dodge his earlier comments, trying to change the subject.

"This is just another sleazy attack on my faith." Mourdock said. "Cong. Donnelly will have to defend the friends he keeps. As for me, I'm going to talk about repealing Obamacare and creating jobs."

Donnelly is Mourdock's opponent in what is shaping up to be one of the nation's more high-profile and hotly contested Senate races.

"The timing ... added fuel [to the controversy]. Mourdock made his remarks in a debate that came just one day after his campaign began broadcasting a television spot featuring an endorsement by GOP presidential nominee Mitt Romney," noted The Washington Post. "Mourdock is the only Senate candidate for whom Romney made such an advertisement," The Post continued.

Flynt's ad states, "I will accept for purposes of this reward any verifiable transcript of your personal conversations with God; letters, email or text messages or videos from God, or messages addressed to you from God transmitted by any third party, including the Republican National Committee" or the campaign of Republican Presidential nominee Mitt Romney.

Flynt goes on to say in the advertisement that he assumes Mourdock would not have made his statement, a response to a question on abortion during the Oct. 23 Senate debate, unless he had been "authorized by God."

"No one who believes in God would ever use the Almighty's name in vain," the ad states. "That would be blasphemy."

Mourdock has since backtracked from his polarizing statements that God preordains rape, stressing that his debate comment was misconstrued and that he does not believe God intends for anyone to be raped.

"What I said is God creates life. As a person of faith, I believe that," Mourdock said after the debate. "Does God want people raped? Of course not."

Mourdock said his position on abortion is that he believes the only exception should be in instances where the mother's life is in jeopardy.

A spokesman for Flynt said the ad was placed only in The Star.

"Absent his assertion of divine intent, the comments by Richard Mourdock explaining his opposition to abortion even in cases of rape and incest were not that different from those made by others who believe in an absolute ban," said The Washington Post.

Numerous news sources have drawn comparisons between Mourdock's comments and similar statements made in August by Missouri state representative Todd Akin that "If it's a legitimate rape, the female body has ways to try to shut that whole thing down."

When asked in an interview with a St. Louis TV station whether women who became pregnant due to rape should have the option of abortion, Akin's full response was: "Well you know, people always want to try to make that as one of those things, well how do you, how do you slice this particularly tough sort of ethical question. First of all, from what I understand from doctors, that's really rare. If it's a legitimate rape, the female body has ways to try to shut that whole thing down. But let's assume that maybe that didn't work or something. I think there should be some punishment, but the punishment ought to be on the rapist and not attacking the child."