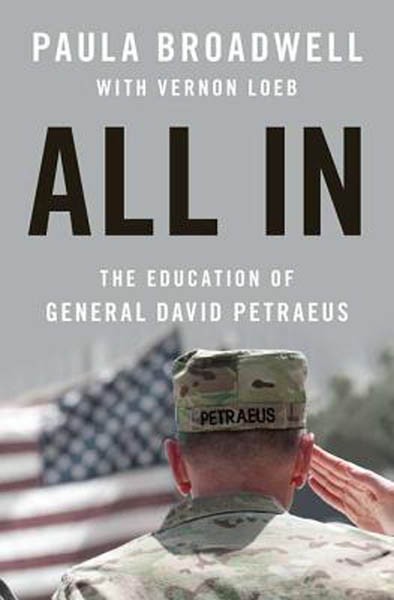 Broadwell spent over a year interviewing Petraeus for her unofficial biography on the general.
(Photo : Good Reads)

As more details come to light about Gen. David Petraeus's affair with biographer Paula Broadwell, the story only continues to get weirder. Prior news breaking of the extramarital affair between the two, Broadwell was desperately trying to get a regular spot as a correspondent on various TV networks, promoting herself to as a self-proclaimed, "military expert," according to The Hollywood Reporter.

During TV appearances in January for her Petraeus biography "All In: The Education of General David Petraeus," Broadwell pitched herself relentlessly to networks as an authority on the military. Much her dismay, none were interested. And now we may know why: "Something seemed off. She was creepy," revealed an unnamed source to The Hollywood Reporter.

Broadwell has been doing everything in her power to dodge reporters in the wake of the scandal, and this is likely one of the many reasons why.

With much of the media portraying her as a jilted-lover-turned-stalker, Broadwell is reportedly "devastated" by the effect the fallout from her affair has had on her family.

"She's trying to live as normal a life as possible, but there are moments of realizing all that has happened," says a source close to Broadwell who asked not to be identified.

Unsurprisingly, Broadwell has yet to reach out to the media to offer her version of events. But, according to TV news bookers who spoke to THR, Broadwell is on "lockdown."

"It's radio silence," complained one morning show producer to THR.

According to media professionals, remaining silent on the affair may actually be the smartest strategy for Broadwell right now.

"You don't want to dig yourself into a deeper hole by doing an interview," says Chris Lehane, a lawyer and communications expert who has worked with Lance Armstrong and Madonna. "It's one thing to go on TV, it's another thing to effectively communicate on TV. Most people can't do it."

The FBI is still currently investigating Broadwell concerning the classified documents found on her home computer, which investigators believe the author gathered while researching her biography of Petraeus in Afghanistan.

Broadwell's affair with Petraeus was revealed after another female acquaintance of Petraeus's, Tampa socialite Jill Kelley, complained to the FBI that she had been receiving threatening anonymous emails. The emails were eventually traced back to Broadwell, leading the FBI to uncover her romantic relationship with Petraeus, which allegedly ended over the summer.

According to The Boston Globe, "Kelley served as sort of an unpaid social liaison for Central Command, hosting parties at her and her husband's home, where senior officers would mingle with Tampa's elite," said the newspaper.

Broadwell also reportedly personally harassed Kelley, implying her attention to Petraeus was inappropriate, and telling her to stay away from "my man." Officials say that Broadwell viewed Kelley as a romantic rival for Petraeus.

The FBI has not yet announced whether they plan to prosecute Broadwell for bringing classified material into her home. However, as many publications speculate, depending on the nature of the classified information, Broadwell's punishment may come from the military.

"The whole thought or idea that you have classified information on your personal computer at home, I'm sure violates some Army regulations if nothing else," said Brad Garret, a former FBI agent and consultant to ABC News.