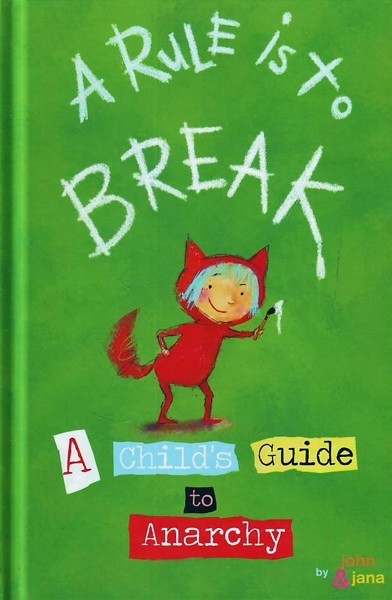 A Rule Is to Break: A Child's Guide to Anarchy
(Photo : Tumblr)

Children's book A Rule Is to Break: A Child's Guide to Anarchy comes under the wrath of Tea Party Publication Liberty News Network calling the book content "downright shocking".

While a review of Publisher Weekly was all praise for husband-and-wife team John Seven and Jana Christy's Children's book A Rule Is to Break: A Child's Guide to Anarchy, Tea Party Publication Liberty News Network thinks the book is "horrendous."

Earlier in November, Publisher Weekly published a review of the book stating that though likes from the book like "when someone says 'Work!', you say 'Why?'" and "No baths ever again!" will offend some adults, line like "Educate yourself. Use your brain" and "Listen to the tiniest voice'" makes the book likable. The review calls the book "the softer side of anarchy, with an emphasis on fun and independence, but also community and kindness."

However, Liberty News Network feels otherwise and things the content of the book is "downright shocking."

"The book alone is horrendous enough. But it gets even worse when we realise Bill Ayers, radical terrorist leftist and friend of Obama, not only endorsed it through his Twitter account, his comments in support of the book are listed on the actual Amazon.com book page," writes Eric Odom, managing director of Liberty News Network. "Wow ... If a person can be read by the company he keeps, what does this say about Obama?"

The book was released by small San Francisco publisher Manic D Press and they are not one bit offended by the above comment, saying sales of the book have been "pretty good."

"The Tea Party doesn't like A Rule Is to Break because it's anti-capitalism," publisher Jennifer Joseph told the magazine, adding that she'd also sent copies to rightwing pundit Bill O'Reilly and comedian Stephen Colbert with a "happy holidays" card.