Hatchet Job of the Year Award: 8 Book Critics Contend For The Awards This Year 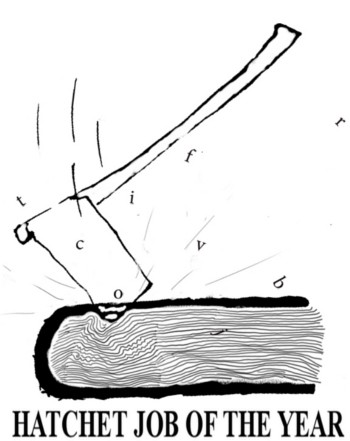 Hatchet Job of the Year Award: Book Critics Gear Up After Nominees Are Announced
(Photo : hatchetjoboftheyear.com)

Book critics that have been shortlisted for the "Hatchet Job of the Year Award" include some of the harshest book reviewers.

The "Hatchet Job of the Year Award" was invented to award a critic that writes "the angriest, funniest, most trenchant book review of the past 12 months" with the intension to "promote integrity and wit in literary journalism."

The shortlisted contenders for the award this year is out and ranges from Zoë Heller's attack on Salman Rushdie's "Joseph Anton" calling it "an unembarrassed sense of what he is owed as an embattled, literary immortal-in-waiting pervades his book" to Ron Charles's review of Amis's Lionel Asbo in the Washington Post accusing it of "serving up blanched stereotypes on the silver platter of his prose as though it contained enough spice to entertain or even shock".

Craig Brown's write-up in the Mail on Sunday on Richard Bradford's "The Odd Couple" calling it "a triumph of 'cut and paste' - indeed, such a triumph that by now Bradford must be able to press the Command button and C for Copy simultaneously in his sleep," also makes it to the list of 8 nominees in the list.

Other nominees include Richard Evans's article on AN Wilson's "Hitler" describing it as "a travesty of a biography" along with Claire Harman's review of Andrew Motion's novel "Silver" claiming it to be "both boring and implausible."

Camilla Long made it to the list for her review of Rachel Cusk's Aftermath in the Sunday Times while Suzanne Moore's rejection of Naomi Wolf's "Vagina" also makes it on the list. Talking about Wolf Moore says, "She comes in a package that is marketed as feminism but is actually breathlessly written self-help."

The results will be announced February 12.