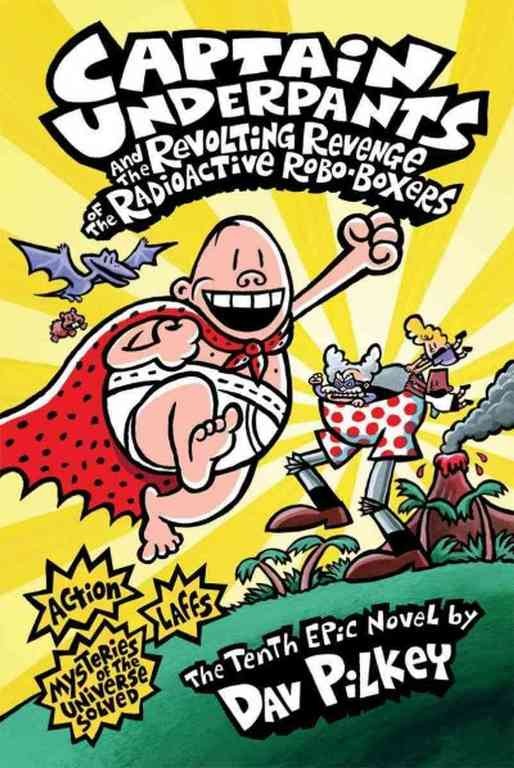 "Captain Underpants and the Revolting Revenge of the Radioactive Robo-Boxers."
(Photo : npr.org)

The tenth book of the "Captain Underpants" series has been released. The author Dav Pilkey says the "Captain" character in the book portrays a lot of what he is in real life while parents complain that the book doesnt set the right example for kids.

Any book that encourages youngsters to read is a hit. And Dav Pilkey's "Captain Underpants" series is definitely among a kid's favorites. The author recently announced the release of the 10th book in the series and has titled it "Captain Underpants and the Revolting Revenge of the Radioactive Robo-Boxers."

"Captain Underpants" tells tales of kids have mischievous fun and included names of characters that the catchy and fun - exactly what interests a kid. A report reveals that all books in the "Captain Underpants" series have made it to the best sellers list on USA Today.

In a report by NPR, Pilkey reveals that in all his books he refers to himself and kids as "we" and adults as "them" creating a notion of kids vs. adults. The author begins the book by stating how adults are always "not happy" when kids are having fun. He then goes on to write that reading his "Captain Underpants" series is the best way to get away from grown-ups nagging about watching TV or playing video games.

Pilkey also notes that the "Captain" character in the book portrays a lot of what he is in real life. The can relate to the feeling to getting into trouble for playing pranks and having problems reading.

"I remember every kid in the class would have to stand up and read a chapter from our history book or something. And whenever it was my turn, everyone would just kind of groan, like 'Ugh, Pilkey's reading again.' And it just took me so long to get through it. I had all these really negative associations with reading. I just hated it," he says.

As much as children love the book, parents seem to have a lot of complains. They say the book encourages children to play mischievous pranks like the two protagonists of the novel George and Harold. The two draw comic strips of their principal and portray him as the superhero "Captain Underpants" because he wears only underpants and a red cape.

This and many other incidents mentioned in the book has led to the book being listed in the Top 10 most complained about book by the American Library Association.

Pat Scales, chair of the ALA's Intellectual Freedom Committee notes that the top most complain coming from parents about the book is "nudity" as "Captain Underpants" wears nothing but a pair of underwear. Also, parents complain that the book encourages kids to disobey higher authorities and uses "vulgar language." Parents also complain that incorrectly spelt words like "trubbel" for "trouble" and "laff" for "laugh" don't set a very good learning lesson for kids.