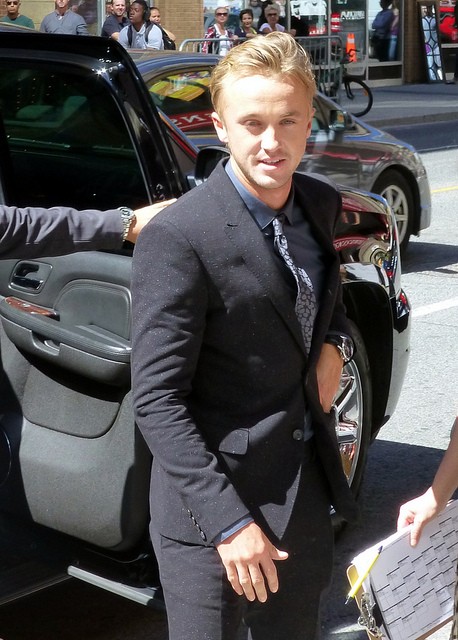 Tom Felton during the premiere of Belle in the Toronto Film Festival.
(Photo : GabboT/Flickr)

June 5 is Draco Malfoy's 35th birthday, author J.K. Rowling revealed via Twitter. After a fan called Rowling's attention that it was indeed Malfoy's birthday, the author revealed that the fictional character from her immensely-popular "Harry Potter" series had turned 35 years old on that day.

"Draco turns 35 today," Rowling tweeted. "I'm not invited to the party, mainly because I keep telling girls they're misguided to fancy him."

The comment reflects the author's stance on the legions of fans who fancy Malfoy. Last year, Rowling wrote through the Pottermore website that girls everywhere had some reason to doubt Malfoy's character, saying, "Draco remains a person of dubious morality in the seven published books, and I have often had cause to remark on how unnerved I have been by the number of girls who fell for this particular fictional character." (via Entertainment Weekly)

In 2005, the author commented in the fan magazine The Leaky Cauldron that women tend to be attracted to an "imperfect" character, thinking that "they are going to change them." Rowling also finds that this attraction is unsettling for her, saying, "It is uncomfortable and unhealthy and it actually worried me a little bit, to see young girls swearing undying devotion to this really imperfect character". (via The Independent)

Rowling said that Malfoy's "anti-hero" charm and "glamour" is what girls tend to fall for and "romanticize" in their heads. "All of this left me in the unenviable position of pouring cold common sense on ardent readers' daydreams as I told them, rather severely, that Draco was not concealing a heart of gold under all that sneering and prejudice and that no, he and Harry were not destined to end up best friends," Rowling continued. Throughout the series, Malfoy had bullied and shown strong dislike for Harry Potter and his friends. Towards the end of the book, Malfoy served the series' main villain as a Death Eater. It was written that Malfoy married Astoria Greengrass and had a child.

So it is fair to say that after all these years, Malfoy's bad boy image has not fared well with his creator and he should not expect a birthday present from Rowling anytime soon. But Rowling was quick to add that Tom Felton, who played Malfoy in all eight movies, "is about the nicest person you could meet."

Incidentally, Felton had something to say to "superfans" everywhere in his new BBC documentary. The actor told The Daily Mail that meeting fans who are obsessed with him does not sit well with him.

"Having an obsession with a character in a book is fine but when you are obsessed with someone you don't have anything about. I'm more comfortable with people being obsessed with Harry Potter than obsessed with me," the fan said.