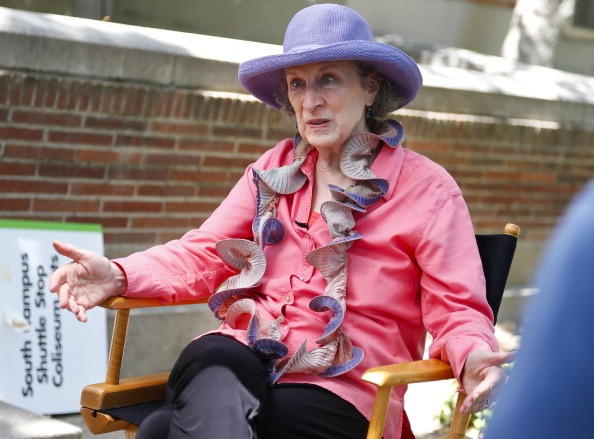 Among the group of ladies up for sharing their personal stories and talents in Hope Nicholson's "The Secret Loves of Geek Girls" is award-winning novelist Margaret Atwood, who will creatively retell her personal experiences as a young woman by drawing a series of cartoons about them.

Atwood will be joining 40 more female contributors who will fill all 220 pages of the non-fiction anthology with stories told via art and text about love, romance and sex that Nicholson imaginatively described as "a celebration of the stories we tell each other but never make public - until now," Entertainment Weekly reports.

The 75-year-old writer from Ottawa, Canada was even featured on the cover, which was created by Gisèle Lagacé and Shouri, with other selected contributors all in their charming, animated versions. Atwood, who was the one with white hair and a white cat, even quipped via Twitter about how much she loved being depicted with "long legs."

The Secret Loves of Geek Girls is popular on @Kickstarter! http://t.co/OJ1tv7FyOJ (I'm white-hair w. cat; pleased I have long legs at last!)

"She does these nice, kind of autobiographical cartoons in which she expresses her frustrations of being a writer and all that," Nicholson revealed to Entertainment Weekly. "They're very funny and cute. I mentioned that I liked them, and she was surprised because most people haven't seen those from her."

Nicholson, who set up a goal of C$37,000 for "The Secret Loves of Geek Girls" on Kickstarter, is on her way to scooping up almost twice that amount and what's great here is that there's still 25 days to go. Five days back, The Guardian says that the project already netted a whopping C$27,000, and this rapidly increases.

As of this writing, "The Secret Loves of Geek Girls" is now backed by 1,446 people and has gained C$51,388, which is expected to swell up in the next weeks to come. The project was launched last June 22. For those who want to take part in the success of the collection, visit the project's Kickstarter page.

Nicholson aims to debunk the perception that not many geek girls are involved in fandom. In fact, the editor and comic publisher defends that geek girls, like the male ones as depicted on TV and other media, also find it difficult to get dates too, and this is where "The Secret Loves of Geek Girls" comes in.

Expect accounts from Irene Koh on how love can blossom from an MMORPG, learn from The "Friday Society" author Adrienne Kress on how to "turn our crushes into our own personal fandoms" and get a cue from "Nerd Girls Burlesque" writer Loretta Jean on how to "incorporate your geeky interests into your dating profile." Also, prepare to read about how Meags Fitzgerald learned about the mechanics of sex through her "pre-teen love of Sailor Moon."

"The Secret Loves of Geek Girls" is expected to come out in December.