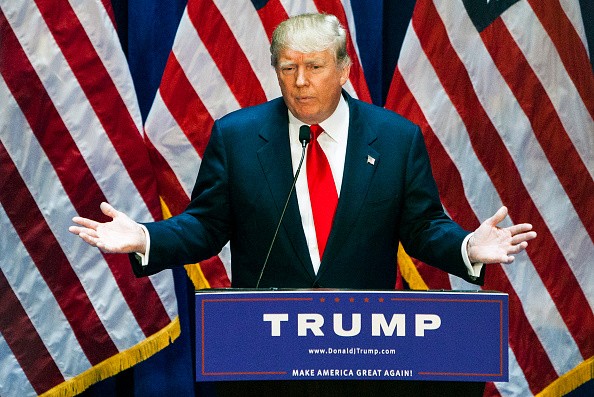 NEW YORK, NY - JUNE 16: Business mogul Donald Trump gives a speech as he announces his candidacy for the U.S. presidency at Trump Tower on June 16, 2015 in New York City. Trump is the 12th Republican who has announced running for the White House.
(Photo : Christopher Gregory/Getty Images)

Donald Trump made headlines right after his campaign launch in June, not for his great speech, but for his demeaning comments about immigrants.

He mentioned that U.S. is becoming "a dumping ground for everybody else's problems," The Guardian quoted.

He also commented that Mexico is "sending people that have lots of problems, and they are bringing those problems to us. They are bringing drugs, and bringing crime, and their rapists."

Just like the rest of the people on the Internet, celebrities are not keeping quiet about the issue.

The event is a charity golf tournament held by the Ricky Martin Foundation at the Trump International Golf Club in Puerto Rico.

The singer also expressed his dismay over Trump's comment via Twitter, which translates to, "A lot of hatred and ignorance in your heart."

Actress Eva Longoria expressed her hesitance to give comments because it would only give the business mogul more attention, according to E! Online.

"What I don't think he understands and what people don't understand is words create emotional poison," she told E! Online's Marc Malkin.

"Hitler moved a nation with words, just words," she said. "So you have to expect this backlash. If you say something like that, as he has said, you must expect a backlash."

Mexico is not sending a representative for the Miss Universe pageant, according to Times. Also, in a statement, Miss USA pageant's Thomas Roberts and Cheryl Burke stepped down as hosts.

"Effective today I have withdrawn from my duties with Miss USA," Burke said as quoted by Entertainment Weekly.

She continued, "Although I will not be there in person, I wish all of the contestants much luck as I know how hard they've all been working over the last year to try and realize their dreams."

She thanked Trump for energizing Latino voters and turning them against him on election day.

Ferrera wrote, "What you just did with your straight talk was send more Latino voters to the polls than several registration rallies combined! Thank you for that."

She also mentioned that, without Latino votes, Trump doesn't stand a chance of winning the presidency.

In response to Trump's remarks about drugs, crime and rape, America said, "No, Mr. Trump, you may not reduce us to drug dealers and rapists.

"We are moms and dads, sons and daughters. We are valedictorians and honor students."

"We are college graduates, bankers, police officers, entertainers, teachers, journalists, politicians and we are the future of America."