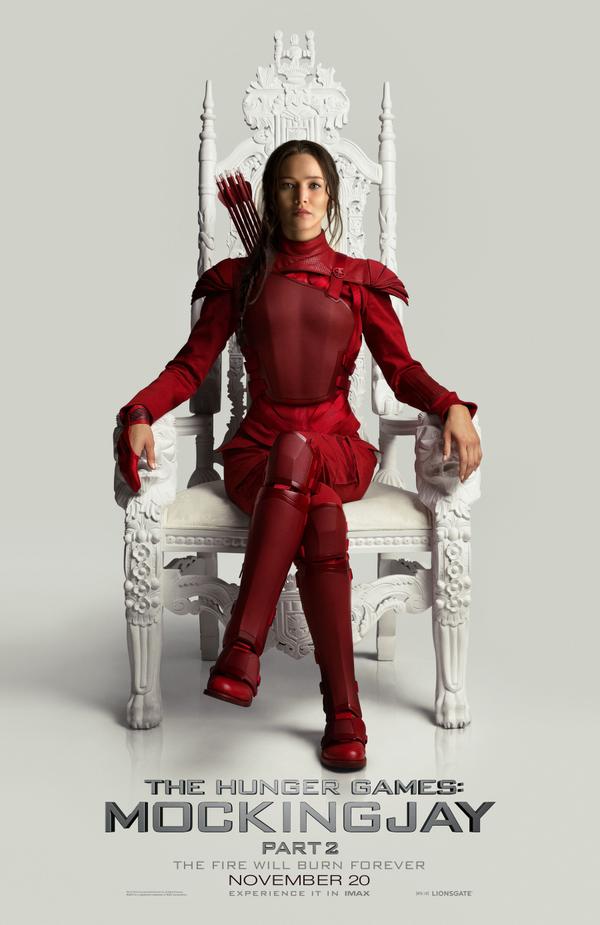 The sweeping success of "The Hunger Games" series by Suzanne Collins is owed to the heroine, Katniss Everdeen, who showed grit and power with or without her bow and arrow. This is what The Guardian believes won the hearts of millions of readers across the globe.

This is what also made the movie adaptations as big as they are now. Director Francis Lawrence promised to Entertainment Weekly that "The Hunger Games: Mockingjay Part 2" will satisfy fans who are fans of the novel.

"Anyone who loves the end of the book will love the end of the movie," Lawrence said. On Nov. 20, when the movie franchise comes to a close, fans will see Katniss' greatest and final fight.

There are a bustle of moments in the books that exemplified the blazing strength of the girl on fire. But Books & Review will attempt the difficult feat to pick out five quotes from the trilogy that ultimately demonstratedKatniss' courage.

1.         "If I had just killed myself with those berries, none of this would've happened. Peeta could have come home and lived, and everyone else would have been safe, too."

"Safe to do what?" he says in a gentler tone. "Starve? Work like slaves? Send their kids to the reaping? You haven't hurt people - you've given them an opportunity. They just have to be brave enough to take it." (The Hunger Games: Catching Fire)

This is when she realized that Panem can actually be freed from the inhumane treatment of The Capitol. It has ignited the minds of those who have been wanting to get out of it and this is where the extraordinary crusade for its liberation was starting to take shape.

2.        "We had to save you because you're the mockingjay, Katniss," says Plutarch. "While you live, the revolution lives." (The Hunger Games: Catching Fire)

Katniss struggled with knowing that there are people out there that are sacrificing their lives for hers, and is still blinded from the fact that she is part of something bigger and grander than what the circumstances are allowing her to see.

This is because she feels betrayed by Peeta, who she worked so hard to save and Haymitch promised to rescue, but ended up in the hands of Snow. Katniss isn't cool with promises being broken, especially when they involve her loved ones' safety.

3.        I stand there, feeling broken and small, thousands of eyes trained on me. There's a long pause. Then, from somewhere in the crowd, someone whistles Rue's four-note mocking-jay tune. The one that meant safety in the arena. (The Hunger Games: Catching Fire)

More than getting out of the games in one piece, Katniss made sure she aids those who are less capable of doing so for themselves. Rue's death haunted her, but at the same time made her stronger and adamant to her stance that no innocent person should experience such agony.

Katniss knows that President Snow's ruthless governance must end and in doing so, she chose to fully become what she was always destined to be. So with all the courage she can muster, she becomes Panem's pillar of freedom and Snow's greatest downfall.

Fans would certainly agree that no other quote in the series made Katniss an epitome of strength more than the words she exclaimed in saving her sister Prim from inevitable danger in the Hunger Games. This is the first time President Snow took notice of her.