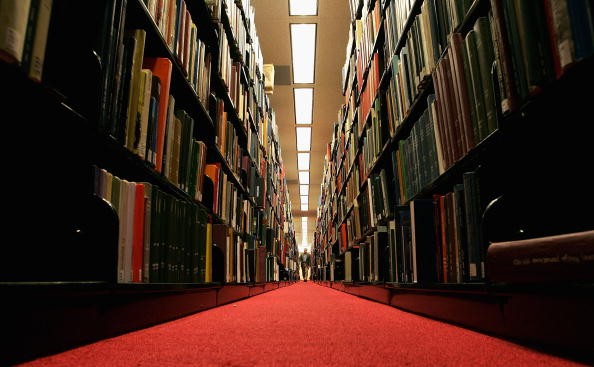 (Photo : Justin Sullivan/Getty Images) STANFORD, CA - DECEMBER 17: A man browses through books at the Cecil H. Green on the Stanford University Campus December 17, 2004 in Stanford, California. Google, the internet search engine, has announced a long-term project to put 15 million books from seven of the world's most prestigious libraries online and make them searchable. Included will be the libraries of Harvard, Stanford, the University of Michigan, the New York Public Library and the University of Oxford, including the Bodleian. Books and periodicals will be scanned and project is expected to take six years and cost more than $100 million. (Photo by Justin Sullivan/Getty Images)

The scorching heat and a mind-numbing staycation can always become fun with science mumbo-jumbo involved. For the love of science and stories, take a trip down the sci-fi lane and make the most out of the dog days of summer with a good book and a futuristic getaway with these five titles.

Huffington Post compares this dystopian novel to "Eternal Sunshine with a Spotless Mind," a Jim Carrey and Kate Winslet-starrer released in 2004. With a hint of everything - from romance to trauma to betrayal, this story is a rollercoaster in itself.

The book implicates the government, who has the technology and the guts to wipe out people's memories and build them up once again through a thorough treatment. In this book, Ball delves into how memories, both good and bad, can shape an individual.

According to Blastr, this novel was the most anticipated release this year for one reason - its unnerving bizarreness. The story centers on a young woman named Joy, who finds herself insusceptible to an outbreak that makes every person on the face of the earth forget who they are.

Ironically, Joy finds this as the perfect opportunity to discover her identity by seeking answers as to why her mother abandoned her as a child. In her journey to make herself whole, she meets the quirkiest characters in the most unsettling setting.

While on the subject of oblivion, Ishiguro's masterpiece, which tackles the same premise (this time, dragons are involved) is not one to overlook.  A string of Arthurian villages were cursed by the breath of an aging dragon, causing its dwellers to reset their memories.

To regain their lost history, an old couple embarks on an extraordinary journey, chancing upon gallant knights, furious dogs and an overly enigmatic boatman, who takes it upon himself to bring sick and dying people in a sleepy nearby island.

According to Geekritiqued, flipping through the sci-fi masterwork is "extraordinary." Planet Montana's place in the universe allowed it to become both independent and susceptible to war. It enjoyed the former for a quite a while until an intergalactic warfare breaks out.

With two contending empires sandwiching the remote world and pirates close to overrunning it, Republic of Aligned Worlds (RAW) steps in to destabilize the situation, with the mission's success banking on Promise Paen, who isn't very keen on reverting to undertakings that got her father killed.

The book is a sequel to Brown's sci-fi hit, "Red Rising." In this tome, the fate of humanity lies in the hands of a miner on the interior of Mars named Darrow. With the Earth almost deemed inhabitable, he makes it his mission to transform Mars into mankind's new home.