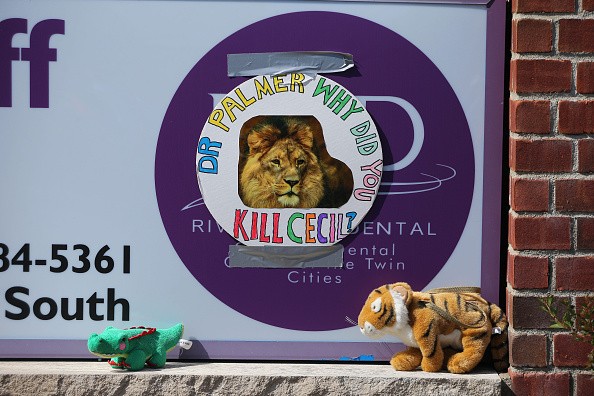 (Photo : Adam Bettcher/Getty Images) BLOOMINGTON, MN - JULY 29: Protesters place stuffed animals on the sign of Dr. Walter Palmer's River Bluff Dental Clinic to call attention to the alleged poaching of Cecil the lion on July 29, 2015 in Bloomington, Minnesota. According to reports, the 13-year-old lion was lured out of a national park in Zimbabwe and killed by Dr. Palmer, who had paid at least $50,000 for the hunt. (Photo by Adam Bettcher/Getty Images)

The world was heartbroken upon the news of Cecil the lion's untimely death. The world-famous big cat in Zimbabwe was slain by an American dentist and bow hunter. The unbelievable atrocity of the slaughter sparked global indignation, which drove the killer in hiding and his business shut down.

According to The Guardian, the killing of the lion, who left children the most shaken and distraught, could serve as the spur of dialogs with kids regarding the responsibilities of mankind to protect the wildlife and the circumstances where it fails to do so.

Seattle Times says that no approach to initiating such important discussions is more imaginative and helpful than exploring the subject with books and stories that put an emphasis on what Cecil should have enjoyed and what she shouldn't have suffered. Here are five titles to pick up that will facilitate.

First published in 1960, the classic volume is an account of a real-life experience. The story follows Kenyan National park ranger George Adamson who kills a lioness to defend himself. Orphaned and vulnerable, the lioness' three cubs were brought home by George.

The fable, which is Silverstein's first children's book, follows a lion who becomes a hunter after eating one in Africa. Discovered by a circus man, the gun-toting animal went by the name Lafcadio the Great and was taken to New York City, where he was spruced up with prim collars and expensive twinsets.

As he enjoyed the high life and became more humanlike, Lafcadio became miserable. He decides to return to the wilderness where he determine what he really is.

This is the story of Akimbo who helps his father, a game reserve steward in Africa, in making sure the animals are out of harm's way expressly in situations where these very creatures become the threats to the town and its livelihood.  The Guardian says the author's spot on descriptions of the parks and the jungle does magic.

This book is for the younger readers (ages 4 and up) and uses pictures to tell the story of the extraordinary friendship shared by a lion and a bird. The former nurses the latter back to health after discovering it injured and left behind by its flock in a garden on a fateful day.

As the lion did, the two shared a meal and hanged out by the fire inside the big cat's cottage until the bird recuperated enough to reunite with its flock.

This wordless story of vibrant, watercolor-dipped artworks, which is for kids ages 1 and up, follows the animals as they protect each other fr0m harm. The lion stops itself from eating the tiny creature while the mouse helps the lion by freeing it from a hunter's trap.