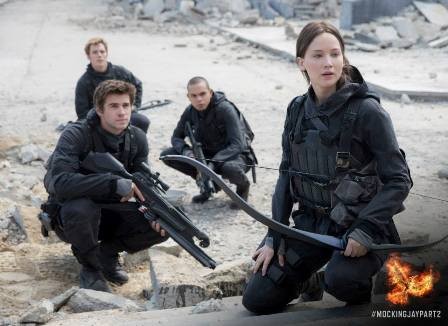 Fiction world in books now look even farther from reality as the authors imagine stranger and bizarre worlds in the future.

Dystopian worlds are usually made up of a frightening community or an undesirable society. However, the genre remains a top favorite among young adults.

Here are five post-apocalyptic books that have become hits among young adults.The list does not include stories made of the zombie apocalypse cliché.

The films that have now grossed over $2.3 billion, with the last installment yet to be released, have been adapted from the three books written by Suzanne Collins, namely: "The Hunger Games," "Catching Fire" and "Mockingjay."

The trilogy is set in Panem, a country divided into twelve districts according to livelihood and resources. While districts are suffering from poverty, the Capitol stands wealthy as it governs the country.

Every year, the districts must send two representatives, one male and female, to participate in the Games, where participants fight to survive and only one Victor comes out alive.

Though usually compared with the world of "The Hunger Games," the Divergent trilogy is set in post-apocalyptic Chicago. The government does not hold any Games; however, the society also has divisions.

When people reach the age of sixteen, they are required to choose a Faction, which are specific groups with unique roles in the society.

Each faction has its own purpose in the community, rules that govern its members and flawed beliefs and practices.

"Divergent" is a film adaptation of the book released in 2014.

3. The Giver by Lois Lowry

As the story starts, "The Giver" looks like a perfect world. There are perfect parents made to match each other, government that looks after every citizen and the future of every child is already decided.

However, the main character gets the chance to see the world before people decided to change everything. As he learns about the past, he starts to doubt the world he once thought was perfect.

"The Giver" has been adapted into the big screen in 2014.

This trilogy shows another dystopian world where teenagers struggle to save themselves and change the world. The Maze consists of high walls where people have to find the exit while constantly trying to stay alive.

The first book is followed by "The Scorch Trials" and "The Death Cure." Dashner also wrote "The Kill Order," a prequel set 13 years before the original book.

5. The Selection Series by Kiera Cass

Though it is the only book that has not been made into a movie yet, "The Selection" is a favorite among teens, especially young girls.

In this world, fairy tale stories and dystopian world clashes together. Just like any other books in this list, this book shows another strange society where people are classified in what looks like a caste system.

The unique twist to this story is that it centers on a prince who needs a bride. Ladies from all caste groups are given a change to join the "Selection" of his princess.