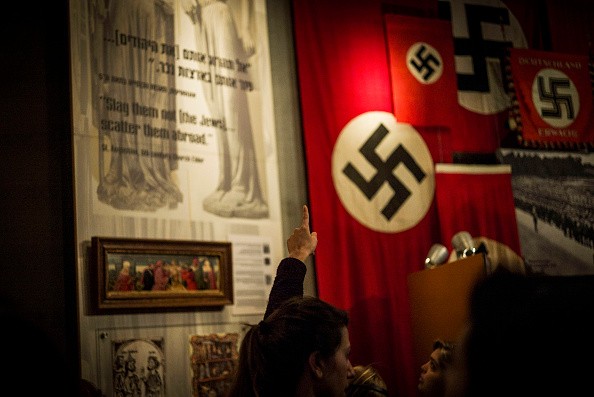 JERUSALEM, ISRAEL - JANUARY 27: A person points to a display as they visit the Yad Vashem museum to see the exhibition and commemorate International Holocaust day on January 27, 2015 in Jerusalem, Israel. Thousands of people will come together today to remember and honour the millions killed in the Holocaust and mark the 70th anniversary of the liberation of Auschwitz by Soviet troops on 27th January, 1945. Auschwitz was among the most notorious of the concentration camps run by the Nazis during WWII and whilst it is impossible to put an exact figure on the death toll it is alleged that over a million people lost their lives in the camp, the majority of whom were Jewish.
(Photo : Ilia Yefimovich/Getty Images)

"For Such a Time," a novel by Kate Breslin about a Jewish woman at a concentration camp, who falls for a Nazi commander in World War II, stirred a massive backlash when it was shortlisted for the best book and best inspirational category in the annual Romance Writers of America awards, The Guardian reports.

According to the news outlet, the book did not manage to take home the honor, but the very thought that it qualified for such titles was "deeply hurtful" and "so offensive and upsetting" for author and Smart Bitches, Trashy Books website co-founder, Sarah Wendell, who, as Jerusalem Post detailed, criticized Breslin for using Holocaust to advocate a religious view.

Reminding how millions of people were killed by the Nazis back then, Wendell argued on her Tumblr, in a letter to the Romance Writers of America panel and everyone who took part in the publication of the novel, that in "For Such a Time," "the hero is redeemed and forgiven for his role in a genocide."

"The stereotypes, the language, and the attempt at redeeming an SS officer as a hero belittle and demean the atrocities of the Holocaust. The heroine's conversion at the end underscores the idea that the correct path is Christianity, erases her Jewish identity, and echoes the forced conversions of many Jews before, during, and after the Holocaust," she continued.

Author Katherine Locke also shared a piece of her mind, and, agreeing to Wendell, called out Breslin for taking part in "the erasure of both victims and survivors of the Holocaust." She adds that "For Such a Time" venerates a Nazi and forces a Jewish woman into Christianity and masquerading it as redemption.

Ironically, Breslin defends in a statement picked up by The Guardian that the controversial book of hers, which RWA says courted "heartfelt and moving" response from readers, "was borne from a compassion for the Jewish people, as in reading from the Book of Esther I realized how they have suffered at the hands of one society or another throughout history."

She defends that the intention that came with the making of "For Such a Time" is simply to share to the world a "more modern-day story" of how a spirited Jewish woman driven by her faith in God can save her loved ones. Despite this, the author did apologize for the offense and damage her work, which she emphasized that wasn't her intention at all, brought to the Jewish people she has the "greatest love and respect" for.