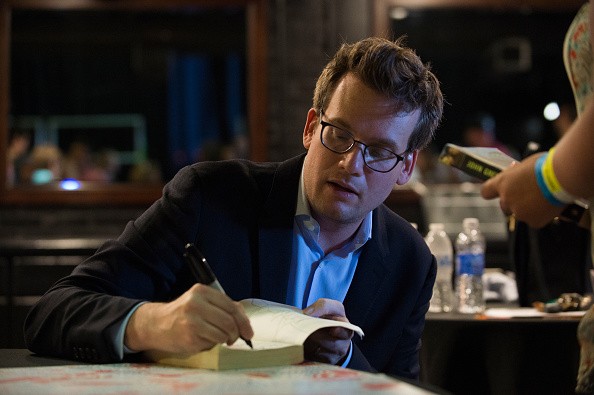 DALLAS, TX - JULY 16: John Green signs autographs for fans on the 'Paper Towns' Get Lost Get Found tour at The Bomb Factory on July 16, 2015 in Dallas, Texas.
(Photo : Cooper Neill/Getty Images for Allied-THA)

When it comes to young adult romance tales, John Green is your man. His stories about young love made the top of the bestseller list his usual destination; each rich paperback has captured the hearts of many teenage and teen at heart booklovers.

But Green hasn't released a book in three years. His last published tome is still the chart-topping cancer-laden love story "The Fault in our Stars," which was made into a blockbuster film of the same name starring "Divergent" stars Ansel Elgort and Shailene Woodley.

Despite earning a rightful place in the literary atlas and having millions of his books sold, the award-winning author "still [feels] uncomfortable" calling himself a writer and still doubts that he already made it is one. He feels strange going "full-time" in writing.

All the same, Green reiterates that he loves what he does and takes it very seriously. During an interview with NPR, he opened up about his writing and elaborated on why he writes stories about young adults for young adults.

In the chat, he revealed why teenagers are the perfect readers and characters. "As readers, they're interesting because I think the books that matter to you as a teenager matter to you throughout your life," Green explained.

He further explains that teens are in a phase where they are shaping ideals and principles, "and it's a tremendous privilege to have a seat at the table in kids' lives when they're going through that process," he said.

Green thinks teenage characters are the ideal subjects for a story owing to the fact that "they're doing so many things for the first time." During these years, they first get to experience love and heartbreaks. Teenage years often allow them to explore who they really are.

"That's really exciting stuff to write about, at least for me. It brings me back to that time in my life which was a really intellectually vigorous time for me," Green gushed. This, in turn, is how he gets connected with his stories.

He feels that before putting out a book, he must be in a way "emotionally involved" with it. That being said, unless he did not "cry for three hours" while reading his stories, he will think there's something wrong.

Green has no word about a new book. He is, however, a constant presence on YouTube with his Crash Course videos with his brother. He has been quite busy with the film adaptations of his books (one for "Looking for Alaska" is in the works).

The latest is "Paper Towns" starring Nat Wolff and Cara Delevingne. A behind the scenes video from the film shows how enthusiastic Green was in the development and production of the movie.