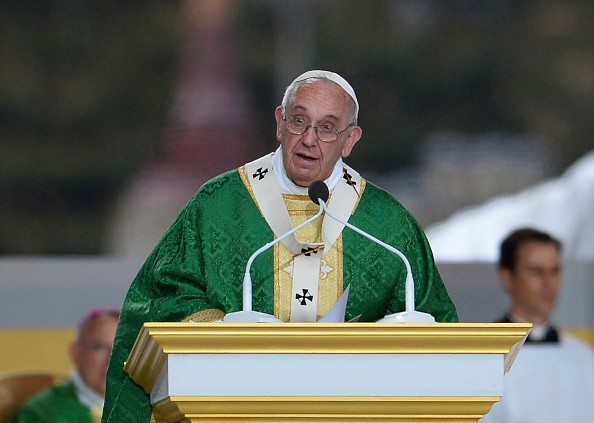 PHILADELPHIA, PA - SEPTEMBER 27: Pope Francis delivers the homily as he celebrates mass at the World Meeting of Families at Benjamin Franklin Parkway iSeptember 27, 2015 n Philadelphia, Pennsylvania. This is the final day of a five-day trip to the USA, which includes stops in Washington DC, New York and Philadelphia, after a three-day stay in Cuba. Pope Francis added the Cuba visit after helping broker a historic rapprochement between Washington and Havana that ended a diplomatic freeze of more than 50 years.
(Photo : CJ Gunther-Pool/Getty Images)

Pope Francis is releasing his very first book since he was appointed pontiff almost three years ago. The tome is called "The Name of God Is Mercy: A Conversation with Andrea Tornielli" and it will delve into the pope's papacy in the form of an interview conducted by Tornielli, an Italian journalist and Vatican expert whose 2013 biography of the pope was translated to 16 languages.

Notably, the book is set to hit the shelves the same day as "year of mercy," a jubilee year started by Pope Francis as a call to every Christian to help attend to people's needs and reach out to estranged and alienated members of the Church on the whole. The event is set to take place on Jan. 12 on so is the book release.

"Drawing for this book on his own experience as a priest and shepherd, Pope Francis discusses mercy, a subject of central importance in his teaching and testimony, and in addition sums up other ideas - reconciliation, the closeness of God -- that comprise the heart of his papacy," Random House describes the book. The publishing firm acquired the North American rights for the title's English and Italian translation.

"The Name of God Is Mercy: A Conversation with Andrea Tornielli" will be released in various formats. LA Times reported that the pope's book will come as a hardcover, an e-book and an audio book (via Random House), each ready for the Jan. 12 launch. According to Wall Street Journal, the tome should come out in at least 12 other languages. More will apparently come with more publishes all over the world showing their interest subsequent to the announcement.

Random House further describes that the pope's book "is directed at everyone, inside or outside the Catholic Church, seeking meaning in life, a road to peace and reconciliation, or the healing of physical or spiritual wounds." Carole Tonkinson, founder of Pan Macmillan imprint Bluebird, which will be handling the book's UK distribution, couldn't be more excited about releasing a book by the pope, who she described via WSJ as an "extraordinary person" and a "spokesperson for mercy."

"It's really amazing how he's reaching across all sorts of barriers in terms of country and religion," she said.

As the world waits for "The Name of God Is Mercy: A Conversation with Andrea Tornielli," everyone can look forward to a Vatican-approved, prog rock-rich album called "Wake Up!" out Nov. 27. Here, listeners would hear Pope Francis deliver sacred hymns and passages with the help of electric guitars,