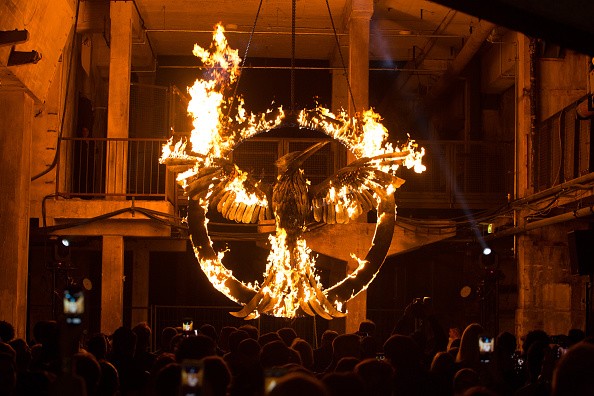 BERLIN, GERMANY - NOVEMBER 11: The burnig symbol of the movie is pictured during the 'The Hunger Games: Mockingjay Part 1' preview event at Kraftwerk Mitte on November 11, 2014 in Berlin, Germany.
(Photo : Christian Marquardt/Getty Images)

Katniss Everdeen has one thing she feels she owes to her friends and that is President Snow's head. In an all new sneak peek for "Hunger Games: Mockingjay Part 2," the fierce District 12 victor declared her plan to take down Panem's persecutor once and for all.

The clip started with Johanna, who recounted her nightmarish days in the Capitol's terrain. Before being saved from captivity, the now-hairless Johanna (the result of the torture she endured) along with Peeta went through all sorts of unimaginable horrors.

"We're old friends you know," Johanna told Katniss pertaining to Peeta. "We're very familiar with each other's screams," she went on to say. Showing no emotion about what she heard, Katniss replies cold-heartedly and said "I'm going to kill Snow."

"Nothing good is safe while he's alive, and I can't make another speech about it," Katniss explained. Johanna was initially and for a moment taken aback about what she heard but ultimately took pleasure in the idea of the president kicking the bucket.

In the "Hunger Games: Mockingjay Part 2" trailer, Johanna looks notably better compared to Peeta, presumably to use him as Snow's leverage over Katniss. In the penultimate film in the saga, Peeta was almost driven insane by the Capitol with the tracker jacker venom.

As pointed out by Collider, the baker's son is still reeling from all that's happened. In another promo for the upcoming movie, Peeta told Katniss about how they tortured and brainwashed him.

Peeta then said to Katniss "You're still protecting me. Real or not real?" Katniss responded "Real." After a shirt pause, she added "That's what you and I do. Keep each other alive."

"Hunger Games Mockingjay Part 2" hits the silver screen on Nov. 20. The film wraps up the blockbuster saga based on the bestselling books by Suzanne Collin. As per Gamespot, the first three films in the series have earned $2 billion worldwide.

Talking about her role as the bold heroine, lead star Jennifer Lawrence told US Magazine that she recognizes the fact that the "Hunger Games" franchise has been a big deal for a lot of people. She believes that her character champions courage and "is overwhelmingly supportive of women."

As for how the character has affected her personally, she said "I don't feel a personal impact. I think if you ever become aware of that it takes away from that a little bit. It's the movie, and the characters... it's kind of like your avatar self."