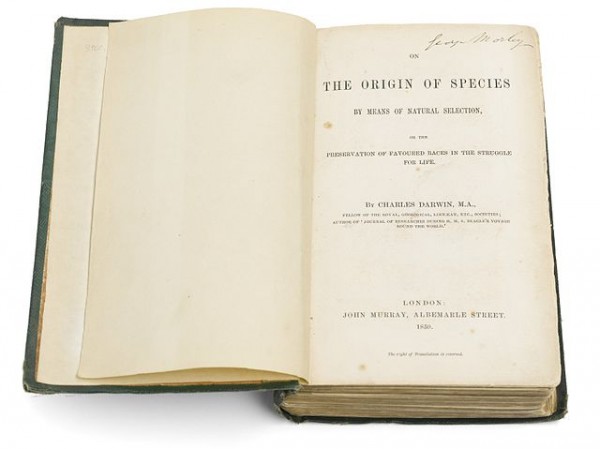 Scientist Charles Dawrin's book "On the Origin of Species" tops the list as "the most influential academic book ever written."

According to a report by The Guardian, the list was drawn up from votes by a pool of academics, librarians, booksellers, and publishers from different disciplines. According to the same report, Darwin's groundbreaking book has been dubbed as "the supreme demonstration of why academic books matter" and "a book which has changed the way we think about everything".

The poll was conducted to mark the inauguration of Academic Book Week celebrated from Nov. 9-16, 2015 in the U.K and beyond. Social media projects, events, competitions and other activities are staged as part of the celebration. According to the Academic Book Week's official website, the week is "a celebration of the diversity, innovation and influence of academic books."

In order, the runner-ups include "The Communist Manifesto" by Karl Marx and Friedrich Engels, "The Complete Works of Shakespeare" by William Shakespeare, "The Republic" by Plato and "Critique of Pure Reason" by Immanuel Kant.

However, the list has its share of controversies. According to The Bookseller, criticisms were aimed at the fact that the list included books authored by non-academics.

In the same article, Samantha Rayner of University College London and one of the people in charge of the Academic Books of the Future Project, says, "As we investigate what an 'academic book of the future' might be in this AHRC/British Library project, this list reminds us of the part evolution, reason, politics and creativity have always played in these discussions."

She adds, "Academic books are ideas captured in text that connect people to each other - and this campaign proves, by the responses it has had, that though definitions of 'academic' may vary wildly, the right of these shortlisted titles to be considered as books that have changed the world is easier to agree with."

Alan Staton, the Head of Marketing at the Booksellers Association, tells The Guardian in an earlier interview that "one of the most interesting things about the list is that it calls into question how we define a book as academic, underlining the fact that when we consider the future of the academic book we must also question our own assumption."

Commenting on the merits of Darwin's "On the Origin of Species", Prof. Andrew Prescott of the University of Glasgow says, "Darwin used meticulous observation of the world around us, combined with protracted and profound reflection, to create a book which has changed the way we think about everything - not only the natural world, but religion, history and society."

Charles Darwin was born in England in 1809. His book "On the Origin of Species" published in 1859, is considered to have laid the foundation of evolutionary biology. Regarded as one of the most influential thinkers in history, his contributions to science were honored through a burial in Westminster Abbey where his body lay near other scientific luminaries such as Isaac Newton and John Herschel.