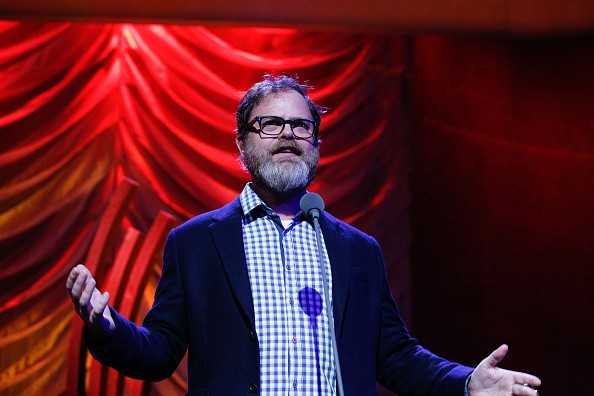 Rainn Wilson recently released his new memoir "The Bassoon King," where the actor recounted the "bone-numbingly nerdy" years prior to the time he stepped into Hollywood and became everyone's favorite pop culture-loving beet farmer Dwight Schrute in the hit comedy series "The Office."

To promote the launch of the book, the actor did a Reddit AMA where he talked mostly about his iconic, memorable character. There, he provided trivia about the sci-fi expert that involves his hairstyle, political views, his comic book-related dream job and everything in between.

During the AMA, Wilson was asked what inspired Dwight's attention-grabbing hairdo. The actor enthusiastically told the story of the character's non-changing do. "I tried to purposefully create the UGLIEST haircut I could possibly design for my ungainly enormous head and forehead," he replied.

"I also stole that from McKenzie Crook who played Gareth [in the original UK version]. He gave him a terrible haircut," Wilson continued. As it turns out, his hairstyle isn't the most unique as a lot of characters from the original show also wore the same luscious locks.

In "The Bassoon King," Wilson got the chance to talk about what inspired and influenced Dwight but the 49-year-old actor was all too generous to give a glimpse to a fan that raised the question. Wilson revealed that McKenzie had a lot to do with Dwight other than his choice of hairstyle.

Wilson dished that he "stole" Crook's "brilliant sense of being unhinged and taking himself completely seriously." He then went on to sing praises for the English actor, who he described as "amazing" as he answered the question.

Wilson was also delighted to spend more of the Reddit AMA revealing how he he'd love to play a supervillain role in Marvel and Dwight's glasses being his "proudest possession." He also gushed about Russell Brand's wisdom, Mindy Kaling's beauty and "gorgeous mind." Check out the whole Q&A here.

Apart from providing ins and outs of "The Office" in "The Bassoon King," the SoulPancake founder put a great deal of focus on the artistic values he learned and embodied growing up owing to Bahá'í faith teachings as well as his early years as a young actor in New York.

Describing the book, Wilson said via LA Times that "I kind of wanted to do a reader's guide for young people about spirituality. Like, the essentials of life. It would be for anyone who was going on a spiritual journey and wanted to think about the concepts of spirituality."