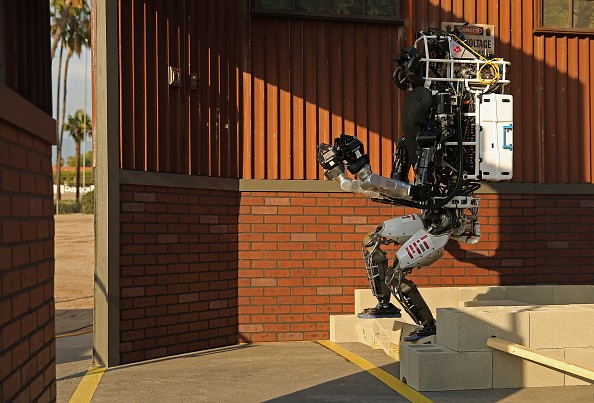 POMONA, CA - JUNE 06: Team MIT's Helios Atlas robot steps down from the rubble task during the Defense Advanced Research Projects Agency (DARPA) Robotics Challenge at the Fairplex June 6, 2015 in Pomona, California. Organized by DARPA, the Pentagon's science research group, 24 teams from aorund the world are competing for $3.5 million in prize money that will be awarded to the robots that best respond to natural and man-made disasters.
(Photo : Chip Somodevilla/ Getty Images)

Silicon Valley entrepreneur Martin Ford's book "Rise of the Robots: Technology and the Threat of Mass Unemployment" nabs the 2015 Financial Times and McKinsey Book of the Year Award. The awarding ceremony was held on Nov. 17 at the Mandarin Oriental Hotel in New York City. According to a report by The Bookseller, Ford received the award from Lion Barber, editor of the Financial Times and Dominic Barton, global managing editor of McKinsey & Company.

"The Rise of the Robots is a tightly-written and deeply-researched addition to the public policy debate du jour and du demain," Barber said. "The judges didn't agree with all of the conclusions, but were unanimous on the verdict and the impact of the book."

Other shortlisted titles tackled various topics ranging from economics to technology. The five runners-up include "Losing the Signal: The Untold Story Behind the Extraordinary Rise and Spectacular Fall of Blackberry" by Jacquie McNish and Sean Silcoff, "How Music Got Free: What Happens When an Entire Generation Commits the Same Crime?" by Stephen Witt, "Digital Gold: The Untold Story of Bitcoin" by Nathaniel Popper, "Misbehaving: The Making of Behavioural Economics" by Richard Thaler and "Unﬁnished Business: Women Men Work Family" by Anne-Marie Slaughter. The runners-up received £10,000 (around $15,300) while the main winner received £30,000 (around $45,800).

The premise of "Rise of the Robots" is focused on how the future possibilities of artificial intelligence and automation can render human labor unnecessary, leading to mass joblessness.

Talking to Business Insider, Ford said that his reason for writing the book is to educate more people about the issue as traditionally, the topic is kept within the walls of the academe. He further explains, "I'm not arguing that the technology is a bad thing. It could be a great thing if the robots did all our jobs and we didn't have to work. The problem is that your job and income are packaged together. So if you lose your job, you also lose your income, and we don't have a very good system in place to deal with that."

According to the Financial Times, since 2005, the business book of the year award is given to books that provides "the most compelling and enjoyable insight into modern business issues." The 2014 winner was "Capital in the Twenty-First Century" by Thomas Piketty.

In the same ceremony, the Bracken Bower Prize was awarded to Christopher Clearfield and András Tilcsik for their proposal "Rethinking the Unthinkable: Managing the Risk of Catastrophic Failure in the Twenty-First Century".