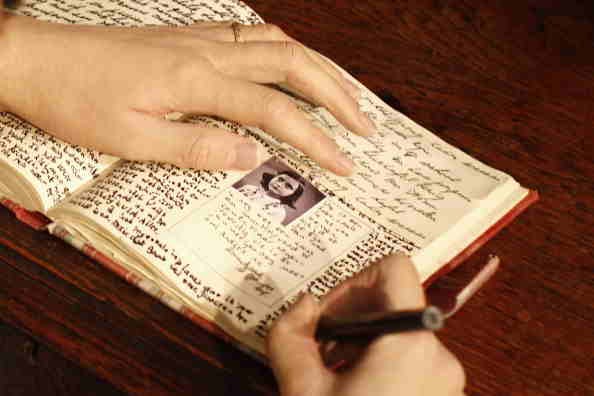 BERLIN, GERMANY - MARCH 09: A detail of the diary of the wax figure of Anne Frank and their hideout reconstruction is unveiled at Madame Tussauds on March 9, 2012 in Berlin, Germany.
(Photo : Andreas Rentz/Getty Images)

Anne Frank Fonds seeks to keep the copyright of Anne's Frank diary from the Second World War by making the Holocaust victim's father Otto Frank a co-author of the journal. With this move, the foundation gets to keep the exclusive rights, which was supposed to expire this year, for another 70 years.

However, a team of two individuals are not prepared to succumb to this. French MP Isabelle Attard and University of Nantes lecturer Olivier Ertzscheid are all set to challenge this action by publishing the original Dutch text from "Diary of a Young Girl" on the web on Jan. 1, as they previously planned.

"Many revisionists, people who want to deny the extermination camps existed, have tried to attack the diary for years. Saying now the book wasn't written by Anne alone is weakening the weight it has had for decades, as a testimony to the horrors of this war," Attard's representative said via The Guardian.

The MP's battle seems to be coming from a personal level as well. "[Attard] lost her grandparents in Nazi camps, she had uncles who were hidden like Anne Frank was - for her it is a very touchy subject, and she wanted to react and not to let the Anne Frank Fonds use its interpretation of the law," the spokesperson added.

As per Haaretz, the foundation argues that Otto's work on the diary of her beloved daughter is enough to name him as the second author of the iconic book that the young girl wrote an Amsterdam warehouse before the 15-year-old died in the Bergen-Belsen concentration camp in 1945.

European copyrights are meant to last 70 years after the death of the author. The rights on Anne Frank's diary were to expire by the end of this year but in a surprising move, Anne Frank Fonds declared as co-author the Frank patriarch, who died in 1980. The foundation gets to keep the book until 2050.

Ertzscheid, who is planning to publish a free French translation of "Diary of a Young Girl," claims that the foundation's claims "are false and legally inaccurate."

Anne Frank Fonds, however, maintains that it is merely their "duty" to keep the public informed of the copyright laws and how they differ in various territories. In making Otto a co-author, member of the board of trustees Yves Kugelmann said: "The book he created earns his own copyright."

He clarified that it is not about him co-writing anything but the work he did to put together the diary "into one reader friendly version." In response to Ertzscheid and Attard's defiance, Kugelmann said "if someone takes a risk to infringe copyright, that is their risk."