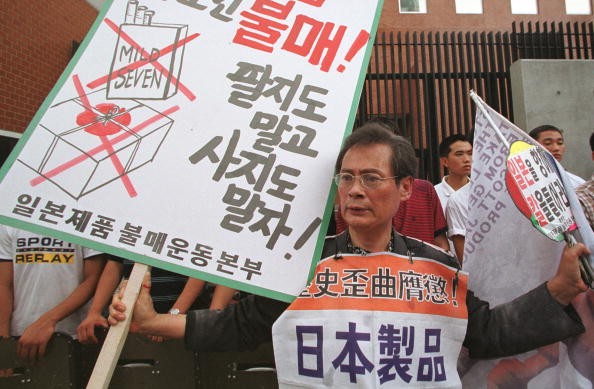 391741 07: South Korean civic group members protest at an anti Japan rally opposing the revision of the Japanese history textbook July 11, 2001 at the Japanese embassy in Seoul, South Korea . The protest is about the controversial issue of a draft textbook that states Japan liberated South East Asia from its western colonists when invaded during World War II.
(Photo : Chung Sung-Jun/Getty Images)

South Korea sent some citizens in arms to the streets of Seoul after the center-right government decided to change olden times literally by rewriting history books they feel favored the left and were overloaded with errors.

"The current textbooks have some mistakes so we want to revise them and correct the mistakes," Park Sung-Min, the head of the reworking project, told BBC. "The authors don't want to change their point of view, so the government will make an accurate textbook," he added.

A minister argued that one of the textbooks up for corrections only used the word "dictatorial" twice on the writings about North Korea -- clearly way fewer than the times the term was associated with South Korea, which was 28 times.

The decision to republish "authorized" versions of these textbooks resulted in what Forbes described as the biggest showing of public remonstration since the citizens of the country expressed their objection to American beef import back in 2008.

The largest gathering of Koreans in protest in years, however, ended up with 50 demonstrators in detention. Water cannons were fired and tear gases were thrown to mollify the protesters, who promised to assemble once again until the decision is revoked.

Professor Chung-in Moon, an instructor in Yonsei University in Seoul, however, suggested a solution where both parties win. "Why should we have one version of a text-book? We need multiple views so students can choose. History can be subject to multiple interpretations," he told BBC.

As per the aforementioned publication, the elder Park was once an instigator of a tremendously violent coup back in 1961. However, that part of history seems to be tightly covered by his achievements as a leader who showed the way to the country's breakneck development and industrialization.

In a nutshell, the former president is regarded as "the founder of South Korean prosperity." A large statue of him was even put up in honor of his history-changing feats and, needless to say, there is no mention of former president's Park's previous rebellious tendencies.

This is why many protesters believe that the current president is pulling the strings in making the rewriting of the history books possible so as to completely wipe clean his father's tainted past.