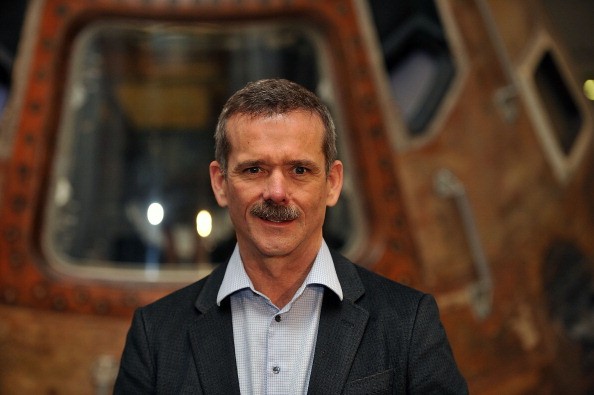 LONDON, ENGLAND - DECEMBER 16: Astronaut Chris Hadfield poses for photos in front of the Apollo 10 Command Module which travelled around the Moon in 1969 on December 16, 2013 in London, England. Chris Hadfield lived aboard the International Space Station (ISS) as Commander of Expedition 35.
(Photo : Bethany Clarke/Getty Images)

Chris Hadfield, the first ever Canadian to walk in space, is set to release a new picture book called "The Darkest Dark." Teaming up with Toronto-based writer Kate Fillion, the 56-year-old superstar will share an important tale about how his ultimate fear and biggest dream as a child interlocked.

The book will come in hardback edition on Sept. 22 next year, but readers will have to wait for 2017 to see the paperback version. Nonetheless, they will be treated with "fine, distinctive" artworks by Terry and Eric Fan, collectively known as The Fan Brothers.

Hadfield, who takes pride in having been able to reach and work with children for 25 years, said via The Bookseller that he is "extremely proud" about "The Darkest Dark," where he talks about "one of our most basic and common fears."

"Pursuing the hopes and overcoming the worries of childhood are such key parts of growing up, and help determine how high we eventually may travel," the astronaut stated, explaining the premise of his upcoming picture book.

Here is the book's summary as stated by a press release acquired by Galley Cat:

"Young Chris loves rockets and planets and is fascinated by everything out there to be discovered, but he can't stop fears from creeping in as he imagines deep space, the absolute darkest dark there is. Only when he watches the groundbreaking Apollo 11 moon landing on TV does he realize that sometimes the unknown can be...exciting!"

"The Darkest Dark" will see Hadfield illustrate how one can overcome his or her biggest fear in order to achieve the dreams they set out for themselves. The highly-anticipated picture book will be the third one the astronaut puts out.

According to CBC, Hadfield has published two books for adults in the past. The first one is "An Astronauts Guide to Life on Earth." Released back in 2013, this tome contains tales about Hadfield's struggles and training in becoming an astronaut and ultimately "[making] the impossible possible.

Just last year, Hadfield released a photography book called "You Are Here: Around The World In 92 Minutes," where he demonstrates the beauty of planet Earth through his favorite pictures. The book presents an idealized orbit of the International Space Station. It currently sits at the top spot on Amazon U.K.'s bestseller list in photography.

Penguin Random House division Tundra Books will bring "The Darkest Dark" to Canada. Little, Brown Books for Young Readers will release it in the U.S. while Macmillan Children's Books will take care of the U.K. region.