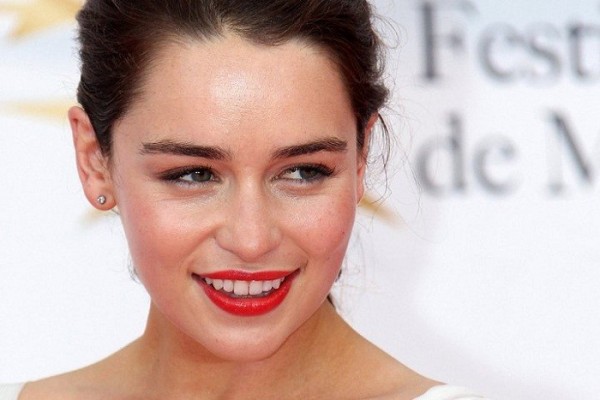 "Fifty Shades of Grey" fans are anxious to know who will play the two key roles of Christian Grey and Anastasia Steele in the steamy film adaption of bestselling author E.L. James' novel.

Recently, Emma Watson has been the frontrunner to play the role of Anastasia, but now it looks like she has competition with "Games of Throne" actress Emilia Clarke.

Clarke plays Daenerys Targaryen in "Game of Thrones." TheStir.CafeMom.com said that casting Clarke would be a great idea:

"The 25-year-old actress, who's a natural brunette, definitely has the right look. She's both innocent and sweet yet has the potential to be extremely badass. And speaking of asses, she has absolutely no problem with nudity, as she had multiple sex scenes with her on-screen husband. Needless to say, her body is smokin'!"

The Stir also said that she is also a "fantastic actress." Since the film adaption will need high quality actors to pull it off, Clarke can prove the one. Also, she's far lesser known that other actresses.

Gather Entertainment also described Clarke as "intriguing" and that she might be a better fit for the role because of her experience with darker themes explored in "Games of Thrones."

"The naturally brunette beauty has done nude scenes on the show; she's the right age for the role; and her face seems perfect for the part - at times she can look a bit awkward and silly, but she can also look rather sensual. This ability is definitely going to be needed to play Anastasia Steele since her goofy inner goddess' inner monologue contrasts so starkly with her steamy sex scenes with Christian Grey," Gather Entertainment described.

It was recently reported that Watson was in talks for the role of Anastasia, but this has not yet been confirmed.

Other stars associated with the role are "Gilmore Girls" star Alexis Bledel, "Pretty Little Liars" star Lucy Hale, "The Vampire Diaries" star Nina Dobrev, "Gossip Girl" and "Melrose Place" star Katie Cassidy, "Twilight" star Kristen Stewart (even though it was confirmed she will not be playing the part) and "Ted" star Mila Kunis.