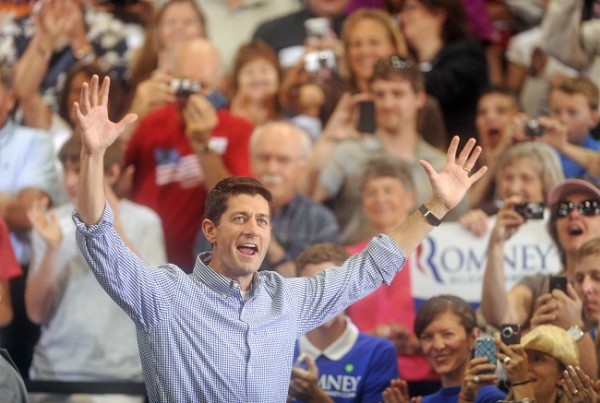 Wisconsin's First District Congressman, and Mitt Romney's running mate for president, Paul Ryan is a powerhouse in his state, winning his seat seven times over the last 14 years. But no matter how popular Ryan is at home, there's another constituency that may hold the Republican vice presidential candidate in even higher regard: Ayn Rand fans.

Ryan is the country's most powerful Randian. Well, he used to be. His adoring relationship with the work of Russian émigré novelist Ayn Rand, author of "Atlas Shrugged" and "The Fountainhead," began, according to a 2005 speech Ryan gave to The Atlas Society, when he was still a student. And it was the guiding light of his thinking on monetary policy decades later:

"I grew up reading Ayn Rand and it taught me quite a bit about who I am and what my value systems are," he told the group.  "It's inspired me so much that it's required reading in my office for all my interns and my staff."

Ryan now denies requiring his staff read to the books.

He continued: "But the reason I got involved in public service, by and large, if I had to credit one thinker, one person, it would be Ayn Rand. And the fight we are in here, make no mistake about it, is a fight of individualism versus collectivism."

Individualism, or objectivism in some cases, provides the philosophical underpinnings for most of Rand's narratives. The novelist and literary critic Harriet Rubin wrote bluntly in the New York Times that "Atlas Shrugged" is a  "glorification of the right of individuals to live entirely for their own interest."

It also celebrates atheism, treating religion with a degree of scorn, a fact that could easily ignite anger in the candidate's conservative base.

"If devotion to truth is the hallmark of morality, then there is no greater, nobler, more heroic form of devotion than the act of a man who assumes the responsibility of thinking," one of Rand's characters says in the novel, the "alleged short-cut to knowledge, which is faith, is only a short-circuit destroying the mind."

This is the point where most politicians and business leaders tend to cut and run, which explains why Ryan has now taken a step back from his avid Rand-fandom in the past few years. As the spotlight gets brighter, presidential candidates tend to move more and more to the center on issues, shying away from any overtly "extreme" views.

And in an interview with the National Review this April, he did a pretty firm about-face:

"I reject her philosophy," Ryan says firmly. "It's an atheist philosophy. It reduces human interactions down to mere contracts and it is antithetical to my worldview. If somebody is going to try to paste a person's view on epistemology to me, then give me Thomas Aquinas," who believed that man needs divine help in the pursuit of knowledge. "Don't give me Ayn Rand," he says.