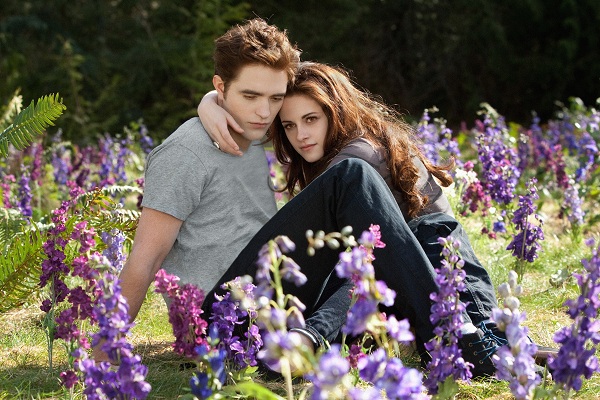 Edward and Bella in the meadow in "Breaking Dawn Part 2"
(Photo : Summit Entertainment)

Alert the masses, ring every bell in every tower, strike your 20-foot-tall gong, shout it from the rooftops: R-Patt and K-Stew are back together! The scandal is over.

Or, that's at least what Summit Entertainment would have you believe. And based on what? Insider gossip? Smoke signals? Canine-level hearing? No, a photo. And while photographic proof would normally suffice, THIS IS A PROMO STILL FROM "TWILIGHT." Come on, people.

Look, we're all gullible at times. Hell, I routinely have my nose "stolen" from me on subway. But Summit Entertainment's recently released new photos of Pattinson and Stewart "together," cavorting, holding each other, and cuddling in a serene meadow, is the idea of baiting the public at its most naked and desperate. Where is the story here? This isn't even news for news' sake.

I get it. "Twi-hards" are so psyched for Edward and Bella news they'll practically read anything relevant. I could probably write an article on what I assume is Edward Cullen's opinion on stem cell research and I'd break the Internet.

I know fans' hearts shattered into trillions of pieces, like so many specks of vampire glitter when Pattinson and Stewart broke up in real-life. But the release of the photos now is nothing more than a strategic public relations move preying on that undying devotion.

"Twilight: Breaking Dawn 2" isn't out for over another two months, and these photos hardly have a thing to do with the film. They do nothing more than try to propagate the idea that while the couple may have broken up in the real-world - apparently a fantastical concept for the movie's production company - we should still realize that their love lives on in the movie. Essentially: "Twilight" propaganda.

So, as a result, not only does releasing the photos easily get everyone on the Internet to fall over backwards to write about them, because they readily disrupt the couple's break up narrative, but it creates scores of non-controversy articles of "OMG. Are they or aren't they back together?" which forces us to twiddle our thumbs and talk "Twilight" once again. Win, win for them.

This is what creating something out of nothing in the 24-hours news cycle looks like. Trust us.  We went to journalism school.