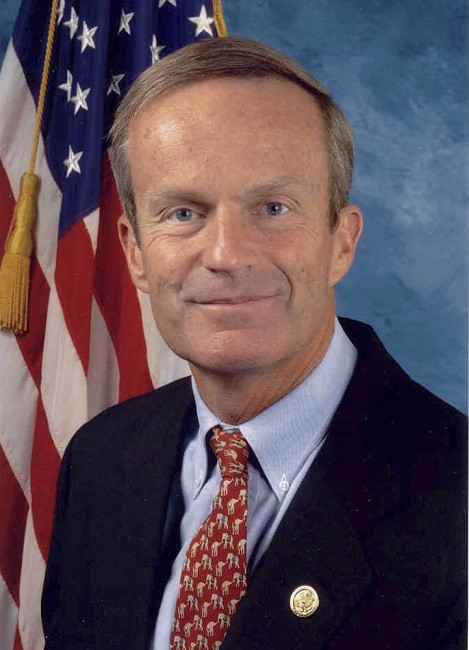 Republican Representative Todd Akin would probably rather forget the last 48-hours. After making the controversial statement that "If it's a legitimate rape, the female body has ways to try to shut that whole thing down," in a Sunday evening interview, even as senior Republicans condemned his remarks and called for him to step aside in the race, Akin just continues to dig himself deeper.

In an ad released online, Akin again apologizes for his comments. "Rape is an evil act. I used the wrong words in the wrong way, and for that I apologize," Akin said in the spot.

"The fact is rape can lead to pregnancy. The truth is rape has many victims. The mistake I made was in the words I said, not in the heart I hold. I ask for your forgiveness," he added. Akin, noting that he is the father of two daughters, also said he wanted "tough justice" for rapists and expressed compassion for victims.

The trouble is not just that Akin made these comments. He apologized for what he said, sure, great - but this is just a classic example of "gaffe damage control." Say you're sorry without taking any real responsibility for your actions, or actually admitting anything. Put out a politically correct sound-bite, something that'll go well on a bumper sticker. And in this case, it's not even really a gaffe. Because Akin can say he's sorry all he wants, but none of that changes Akin's antiquated worldview, and that's what made him make these statements in the first place. This is just sexist blame shifting.

One can only wonder if Akin was referring to cases such as Renee DeVesty in his statements. DeVesty was 19-years-old when she was raped by her best friend's husband and another man she knew and trusted during a camping trip.

"I shut down," DeVesty told Metro. "I was afraid of them. I thought it was my fault. I decided not to tell anyone and pretend it never happened."

DeVesty was forced to confront her nightmare all over again when, two months later, she found out she was pregnant. She was heartbroken by the possibility of having to explain her pregnancy to family and friends who knew she was single. Or even worse, confess that she had been raped. She wondered whether anyone would even believe her.

A Catholic, DeVesty, struggled with the decision, but opted to abort the pregnancy.

"I had no control over what happened to me and here was something else that came with it, and I couldn't live with that," she said. "I had to feel like I had some control over my body and in the end, I felt it was best for me."

DeVesty, who's now 49 and living in Syracuse, N.Y., said she felt sick to her stomach when she heard Rep. Todd Akin say a woman's body can prevent pregnancy in cases of "legitimate rape."

"There is no truth to that whatsoever," DeVesty, who runs Clean Slate Diaries, a support website for sex abuse victims, said. "There is no way someone who has to go through that horror of being raped can legitimately in their head think, 'Now I am going to tell my body not to become pregnant.'"

"To say it's slim that it happens or to make them feel that they did something to create the pregnancy - that they didn't shut down their bodies - is re-victimizing them again," DeVesty said of victims of sex abuse. "I think he should be expelled from the running."

And she's not alone in feeling that way. Officials from the New York locations of prominent organizations like Planned Parenthood and the National Organization for Women expressed outrage over Akin's remarks.

"Todd Akin's comments are ignorant, insensitive, and appalling. It's disturbing that people are legislating and running for office who have such a fundamental disregard for women and women's health," Planned Parenthood spokesman Mel Gagarin said.

"This needs to be a wake-up call to American women," Sonia Ossoria, director of the National Organization for Women in New York, told Metro. "There has been a continued assault on our reproductive rights. We have got to show them who is boss."

"Where do we have control? Where is our say?" DeVesty asked. "The insinuation that it doesn't happen or we have some control over it is unacceptable. That should not be tolerated."

Late Monday, rumors were circulating that the GOP was preparing for Akin to announce his decision to step down from the election, though he had yet to confirm the claim.

Monday Mitt Romney denounced Akin's remarks as "insulting, inexcusable, and, frankly wrong," and top Republicans have called on Akin to withdraw from the race and cut off advertising.