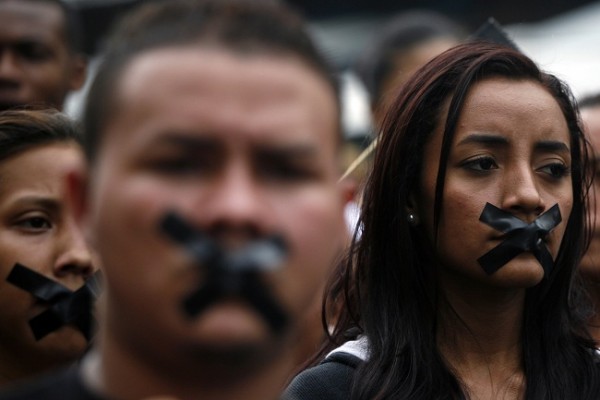 Yahoo News fired Washington bureau chief David Chalian today after a hot-mic incident during an online broadcast from the GOP convention in Tampa. During the broadcast, Chalian can be heard saying that Republican presidential candidate Mitt Romney and his wife Ann were "not concerned at all" and "happy to have a party with black people drowning." Chalian seemed to be referring to the simultaneous occurrence of the GOP convention convening in Tampa and Hurricane Isaac hammering its way across the gulf coast and through New Orleans.

A Yahoo spokesperson released a statement regarding the company's decision to fire Chalian "effective immediately":

"David Chalian's statement was inappropriate and does not represent the views of Yahoo!. He has been terminated effective immediately. We have already reached out to the Romney campaign, and we apologize to Mitt Romney, his staff, their supporters and anyone who was offended"

In what's likely to become a weaponized talking-point for every conservative pundit with a pulse, outlets like Breitbart.com are making quick work of turning the live slip-up into "confirmation bias."

"Here's a look at the black, bitter, bitter, ugly and biased souls of our corrupt media during ABC News' live-feed coverage yesterday ...This is who the media is. This is what Romney and all Republicans are up against. In what atmosphere does a so-called reporter feel comfortable firing off this kind of vicious joke?

Well, the answer is easy: In an atmosphere where you're surrounded in a bubble by elite, ignorant, hate-mongering, ideologically-bigoted leftists just like yourself.

We must defeat these people because that's what they intend to do to us. When you believe our nominee is happy to party while black people drown, you can only believe that we possess no humanity. You can't reason with people who hate you. You just can't.

How are conservatives supposed to do business with a media that considers them evil?"

God forbid we ever talk about issues. This "blame it on The Media" tactic is as old a Republican deflection technique as they come in modern politics.

It saddens me to even have to explain this. But considering how quickly the 24-hour news cycle chews up facts and spits out opinion, just think of this a preemptive strike for whatever nonsense is likely to rain down from "experts" in the coming days.

Just how is Breitbart's interpretation "confirmation bias?" Oh, let us count the ways.

First of all, Breitbart, you quite obviously are part of this media you so inherently despise. In fact, you're part of the segment you claim to despise the most: biased political reporting. So, please quit masquerading as "news."

The assumption that The Media is some autonomous liberal entity rubbing its grubby hands together with glee as it chases Republicans is laughably stereotypical. If you're working for a political news source, like you, there is a bias at hand in reporting, you're paid to write that way. If you work for an actual news company, like Yahoo!, then bias should be kept off the table, which is why the company has fired Chalian after his on-air slip-up.

Next, thank you for continuing to propagate one of the most destructive myths in politics: the danger of "elites." I get it. You're really psyched you graduated college. Hey, it was really hard. You want to impress your demographics with the ol' "Vote for Joe Six-Pack" routine. But this isn't even about "elites" Vs. Joe the Plumber. Attaching these kind of negative connotations to high-level intelligence is, well, about as intelligent as doing that. It's literally that contrived and antiquated. There is no other example.

Finally, this assumption that Chalian somehow speaks for the entire Democratic Party is so misguided, and childish I don't even know where to begin.

What do you think of Chalian's comments? Is any of this worth talking about in the first place? Or, are you like me and just think it's hilarious?