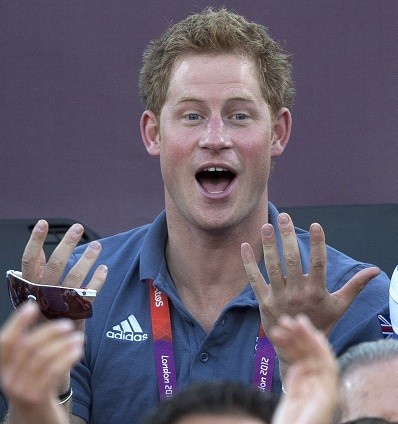 He might never rule the kingdom. But, we're guessing Prince Harry's just fine settling for king of the party. As recently released photos of the prince playing strip-pool in Las Vegas seem to confirm.

Check out the photos here.

The gossip website TMZ published the photos showing the loose cannon prince cavorting naked around a pool table with some equally uninhibited women. Sources told TMZ that Harry and friends invited a bevy of beauties up to his VIP suite at the MGM Grand Hotel and Casino last Friday. A round of strip pool erupted, and apparently everyone lost.

One photo shows Harry in the buff being embraced from behind by a topless woman, while another has him pulling the same move on a nude woman next to the pool table. Clarence House, the prince's official residence and household, told the Daily News that Harry was "on a private holiday and due back in the UK soon."

This is hardly the first time we've seen Prince Harry's name in the tabloids. The naked internet pictures showing Harry, 27, nude women, are the latest gaffe in a long list of scandals that have marked his public life. In the past he's made the papers for doing everything from smoking marijuana as a teenager to a nightclub scuffle with a paparazzi photographer.

Recent years have seen the prince work hard to shape up and shake off his reputation as playboy prince, earned from his regular appearances on the London nightclub scene during his early 20s. The third-in-line to the throne, the prince has become much more focused on his military career, and today is more likely to be pictured in Army uniform then leaving a nightclub.

Yet in the previous decade he's made a habit out of making salacious headlines, most recently taking part in a drunken, fully-clothed 3 a.m. swim race in a casino's pool with U.S. Olympic swimmer Ryan Lochte.

Harry was forced to apologize for describing an Asian fellow officer cadet as "our little Paki friend" when video footage emerged in 2009 of the royal making the comment during his time at Sandhurst Military Academy three years earlier.

Another serious error of judgment came in 2005 when photographs leaked of him attending a friend's dress-up birthday party wearing a swastika armband, causing serious outrage. The incident happened in the run up to the national commemorations attended by the Queen to mark the 60th anniversary of the liberation of the Auschwitz concentration camp. Clarence House quickly issued a statement saying the young prince was sorry if he had caused any offence.

The prince was again embroiled in controversy in the autumn of 2004, when his former Eton art teacher claimed she helped him cheat in his A-level. Clarence House described the allegations by fired tutor Sarah Forsyth as "incredibly unfair," and the exam board later said there was no evidence to support the claims.

Then just a week later, Harry was pictured scuffling with a photographer outside the Pangaea nightclub in central London. No criminal action resulted, but the paparazzi snapper's cut lip and the pictures of an angry, red-faced Harry further dented his image.

Harry's first serious negative publicity happened when, as a 17-year-old, he was involved in under-age drinking and smoking marijuana.

The News of the World broke the story and told of how the Prince of Wales had sent his youngest son to visit a rehabilitation clinic, Featherstone Lodge in south east London, to highlight the long-term dangers of drug use.

Yet, Mark Bolland, Deputy Private Secretary to the Prince of Wales, admitted some time later that the visit to the center had actually taken place several months before, prior to evidence of the drug-taking being uncovered by the press.

During his schooldays, Harry was relatively sheltered from exposure to the media partly thanks to the protection of his mother. Through an informal agreement struck in the wake of her death, the media left Harry and William alone while they finished their education.