'Game of Thrones' Books vs HBO TV Series: How Much Are They Different? 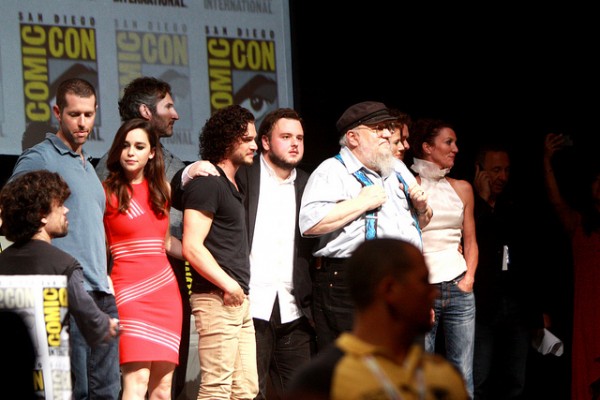 The cast of HBO's 'Game of Thrones' together with creator George R.R. Martin during the 2013 San Diego Comic Con.
(Photo : Gage Skidmore/Flickr)

Just after eight episodes, HBO's "Game of Thrones" has managed to gain both praises and criticisms from fans of the show and the books. After reports that the TV series will surpass the books, however, audiences can expect to see more changes in the upcoming episodes.

One big change that shocked "Game of Thrones" fans is the rape of Sansa Stark by her husband Ramsay Bolton. According to NY Post, another character was raped in the book. Apparently, Sansa was not able to go to Winterfell at all because she went to Littlefinger disguised as her younger sister. It was Jeyne Poole, dressed in Sansa's garb, who got married off to Bolton, reports Express. In an article published by Vanity Fair, the rape scene in the book was reported to be more gruesome, with Theon Greyjoy, a former ward of the Stark family, joining Bolton in the assault instead of just being forced to watch.

Another difference was seen between Jon Snow and the White Walkers and their huge battle scene in Episode 8, Vox says.The battle between actually the two never happened in the book. Jon Snow did not leave the Wall and to go to Hardhome because he has to guard and run the Night Watch, being the Lord Commander of the Wall.

Season 5 of "Game of Thrones" features new characters, The Sand Snakes which will feature three fierce sisters who are daughters of Prince Oberyn Martell. In the books, The Sand Snakes has eight sisters, with the three oldest sisters -- Obara, Nymeria, Tyene, trained by their own father in armed combat.

The latest episode of the HBO series saw Daenerys meeting with Tyrion, wherein they discussed the latter's role as her possible adviser. In the books, this meeting did not happen, as the two have not crossed paths just yet. Incidentally, Varys also did not leave with Tyrion for Pentos, as seen in the pilot episode of the season.

In the second episode of the season, audiences saw Bronn's soon-to-be- wife Lollys Stokeworth. However, their marriage was put on hold after Bronn left for Sunspear, thanks to Jaime, who enlisted Bronn on a secret mission. In the books, Bronn never left Lollys after leaving King's Landing. He was simply enjoying his new title and rank as lord.

Other minor changes in the latest season so far include Ser Loras behind bars after being accused of homosexuality. In the book, he was busy trying to recapture Dragonstone. In the show, audiences saw the death of Ser Barristan, but in the books, he was still serving the Mother of Dragons with Grey Worm.

Fans could expect more daring deviations from the HBO series. If you need to know more, or would want to check as far back as Season 1, this GoT chart might be of help.