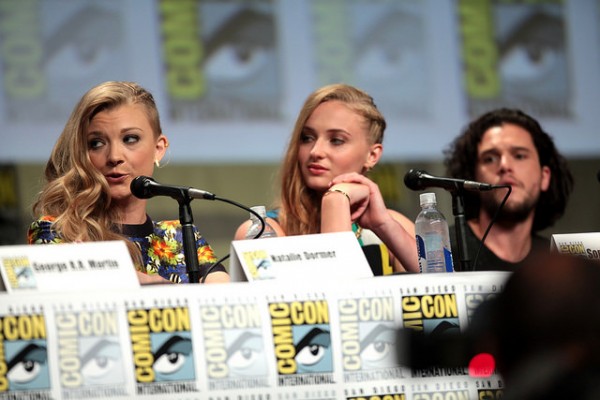 Natalie Dormer and Sophie Turner during the "Game of Thrones" panel at the 2014 San Diego Comic Con.
(Photo : Gage Skidmore/Flickr)

It seems that Sansa's rape continues to draw backlash and controversies from several media outlets and women's advocacy groups. According to NY Daily News, several groups advocating gender equality and fair portrayal of women on TV had publicly shown their disapproval over the show's alleged glorification of violence against women. So far, the latest season of the show had featured two rape scenes in separate episodes, the latest of which included Gilly (Hannah Murray) where she was stripped off her clothes by two men.

The New York chapter of the National Organization for Women had spoken up against the TV show, saying that the "gratuitous rape scenes feed the rape culture." Safe Horizon, the country's biggest advocacy group representing victims of violence also condemned the series because to them, "there is no excuse for promoting a rape culture for the sake of 'entertainment'."

Amidst the ongoing criticisms, the creator of "Game of Thrones," George R.R. Martin, opened up about the female characters and their plotlines. Speaking to Entertainment Weekly, Martin explains that the way his female characters are portrayed in his novels are part of the story's drama. "If you're going to write about war, and you just want to include all the cool battles and heroes killing a lot of orcs and things like that and you don't portray [sexual violence], then there's something fundamentally dishonest about that," says Martin.

The author further explains that his novels as well as the TV series based on his work are reflections of a much-older society, where gender equality has not yet existed. He says, "The books reflect a patriarchal society based on the Middle Ages. The Middle Ages were not a time of sexual egalitarianism. It was very classist, dividing people into three classes. And they had strong ideas about the roles of women." Martin adds that he wanted his books to be "grounded in history" despite the fact that "Game of Thrones" belong to the fantasy genre. Through his books, he wants to show what the Medieval was all about, including things that modern society would consider gruesome and inappropriate.

Martin also defends his characters, saying that despite the violence, his female characters are among the strongest because they "don't fit comfortably into the roles society has for them." Despite of the negative feedback surrounding his female characters' storylines, the author also says that these have a large fanbase composed of mostly females.

For Martin, rape is still an unfortunate part of our society and people should not "pretend it doesn't exist." His portrayal of violence is his way of showing struggle and conflict to drama because writing about what is ideal can be "a pretty boring book."