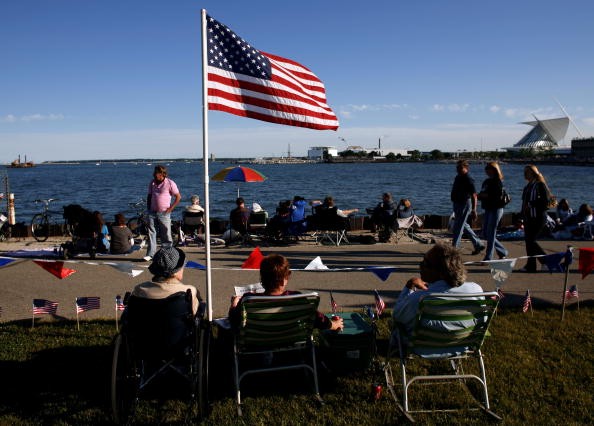 MILWAUKEE - JULY 3: Three women sit under the American flag as people gather for a July Fourth fireworks show on the shore of Lake Michigan July 3, 2008 in downtown Milwaukee, Wisconsin. The city traditionally has its celebration on July 3 so as not to compete with the celebrations of the surrounding communities.
(Photo : Darren Hauck/Getty Images)

Fourth of July doesn't always have to be all about live fireworks, holiday getaways and loud concerts. Sometimes, the best way to celebrate this day, is to just chill comfortably in the couch with popcorn and drinks, watching the best line-up of movies for a holiday marathon.

Here are five classic films to watch on Indepence Day:

"Jaws" is the film adaptation of Peter Benchley's best-selling novel of the same title.

After a young woman is attacked by a man-eating shark, community police chief, Brody, wants to close the beach. However, the mayor just can't let the resort community lose the tourists looking for a Fourth of July holiday.

This classic science fiction film made shook many hearts in terror as a police chief, a fisherman and an oceanographer battle against the monster. The film is also a reminder why sometimes, a movie marathon is better and safer than a holiday getaway.

"Yankee Doodle Dandy" is a musical film that shows the rags-to-riches life of George M. Cohan when he was a child star in a vaudeville.

He was known for his patriotic activities during World War I and became the first entertainer to receive the Congressional Medal of Honor from President Franklin Roosevelt.

George M. Cohan is now remembered as a theatrical legend in Broadway history and the creator of World War I's song, "Over There."

"Born on the Fourth of July" is the film adaptation of Ron Kovic's bestselling autobiography of the same title.

The film tells the true story of Ron Kovic portrayed by Tom Cruise. Kovic is a patriotic athlete, who enlists for the Marines to serve in the Vietnam War.

The New York Times says the award-winning film is "of enormous visceral power with, in the central role, a performance by Tom Cruise that defines everything that is best about the movie."

While some of the other films listed are thriller and action movies, "1776" is the film adaptation of a Broadway musical of the same name with Sherman Edwards behind the musical score.

The film depicts the events that occurred prior to the signing of the Declaration of Independence.

Before the people had a reason to celebrate July 4, representatives from thirteen colonies gathered to fight for freedom from Great Britain.

With great memoirs and speech transformed into monologs and songs, the struggle for independence makes a lasting impression. It is known as the one of the most patriotic films of the '70s.

"Independence Day" is not only about wars and declarations, the disastrous science fiction film shows an alien invasion taking over the world.

While the Earth is in danger, a technician and computer wizard suddenly discovers what the aliens are up to. The film ends with a grand climatic celebration of Earth's safety, which falls just in time with America's Indepence Day.