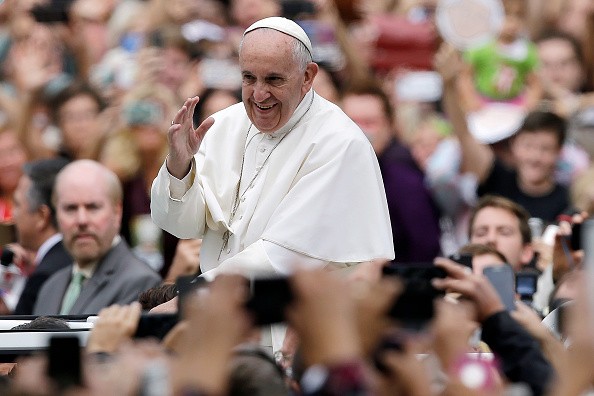 PHILADELPHIA, PA - SEPTEMBER 27: Pope Francis acknowledges faithful as he parades on his way to celebrate Sunday Mass at Benjamin Franklin Parkway September 27, 2015 in Philadelphia, Pennsylvania. Pope Francis concludes his tour of the U.S. with events in Philadelphia on Saturday and Sunday.
(Photo : Matt Rourke-Pool/Getty Images)

In celebration of the Jubilee year of mercy, a book by Pope Francis will be published. Titled "The Name of God is Mercy," the book will be out in Jan. 12, 2016 to coincide with the special event. Just recently, the cover of the book was unveiled, as per New Vision.

As per the aforementioned site, the cover of the upcoming tome shows that the Vatican coat of arms with "Pope Francis" written in capital letters. The title of the book is in red ink and is written in the pope's handwriting.

As previously reported by Books N Review, "The Name of God is Mercy" will be the first book Pope Francis will release since he was appointed as the pontiff. The book will be in dialogue form with Italian journalist and Vatican expert Andrea Tornielli conducting the interview.

As per Ansa, "The Name of God is Mercy" will be released in 84 countries. Piemme will handle the book's distribution in Italy. The publication added that book will come in six languages  -- Italian, English, French, German, Spanish and Portuguese -- all of which to be signed by Pope Francis.

Penguin Random House will handle the publishing of the Italian and English editions of the book in North America. The publishing house described the world's 226th pope's upcoming book as follows:

"Drawing for this book on his own experience as a priest and shepherd, Pope Francis discusses mercy, a subject of central importance in his teaching and testimony, and in addition sums up other ideas - reconciliation, the closeness of God -- that comprise the heart of his papacy."

Apart from "The Name of God is Mercy," which will be available in e-book and audio formats, Pope Francis is also working on a children's book, which is called "Dear Pope Francis: The Pope Answers Letters from Children Around the World."

According to Galley Cat, the tome will be home to handwritten letters and drawings Pope Francis received from kids around the world age six to 13. Thirty of those will make it in the book alongside the religious leader's responses to each of those.

Antonio Spadaro, SJ and Tom McGrath from Chicago-based publisher Loyola Press, which will publish the book, will serve as the editors.

"Dear Pope Francis: The Pope Answers Letters from Children Around the World" will be published on Mar. 1, 2016.  An English and Spanish version will available in the U.S.