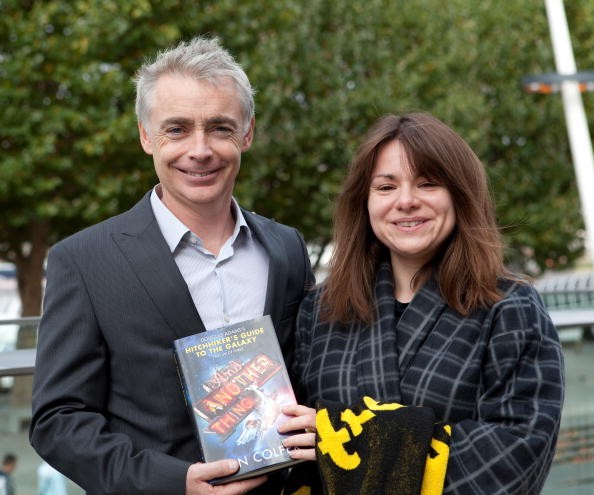 LONDON, ENGLAND - OCTOBER 11: Eoin Colfer hands a signed copy of his book to Victoria Paterson to celebrate the much-awaited sixth book and the final installment of the Hitchhikers guide to the galaxy at Southbank terrace on October 11, 2009 in London, England. And Another Thing will be published by Penguin on Monday October 12, 2009 to coincide with the 30th anniversary of The Hitchhikers Guide To The Galaxy.Eoin Colfer stand out infront of the fans.
(Photo : Stephen Hardman/Getty Images )

Irish author Eoin Colfer, best known for the tales of the cunning, impressionable young lad named Artemis Fowl, recently opened up about his daily routine to Independent. The writer said that his mornings start at 7:20 and, almost always, with horrible migraines that therapies can't seem to fend off.

After dropping off his two boys to school, Colfer heads to the gym with his buddy Declan, in a bid to fight his condition of "being skinny and flabby at the same time." As it turns out, exercise is a big deal and help for Colfer, but not just physically.

"Exercise is really important for writing because if you're running or doing some particularly arduous exercise, you're only thinking about the next 10 or 15 minutes. You can't worry about what's due and what you need to do next week. I'm always worrying about stuff and I over-think everything. It's just my nature," he revealed.

After sipping a glass of smoothie and walking around in his shorts alongside his buddy, he heads home and start the work day. Colfer said that he will skip email and phone call-checking until lunch, edit yesterday's work and write 1,000 words in three hours before he shares lunch with his wife Jackie.

Colfer emphasized how big Jackie's help is in his writing, and basically in his life. They have been in love since they were 16 and, through the years, they had tough times and great times. In terms of writing, it's her preference that he uses as a gauge to know if what he wrote was good or not.

"Having Jackie in my life has made an enormous difference. At the end of the day, I'm trying to please her with my work," Colfer said. "If she really likes something, I'm really chuffed, but if she doesn't like something, I'll sulk," he added.

"When I showed her the first Artemis Fowl book, she told me that it was time to get an agent," the Irish author recalled.

Colfer likes to keep himself busy, even during the times that he should not be. "I'm always thinking about the next thing," he stated. However, he admitted that writing has become tougher than it was with distractions here and there.

At the moment, Colfer is working on a graphic novel and two musicals. His latest work to materialize is a book called "Once Upon A Place," a verbose representation of a magical place that is Ireland.

It is a collection of 11 new short stories and 6 new poems by bestselling children's book writers and it was Colfer that edited the book. "Once Upon A Place" is now available on Little Island for €15.99.

As previously reported by Books N Review, Colfer is almost ready to conclude Artemis Fowl's stories. However, his recent interview with UTV Ireland revealed that he may be done with Artemis but not two younger twin brothers.