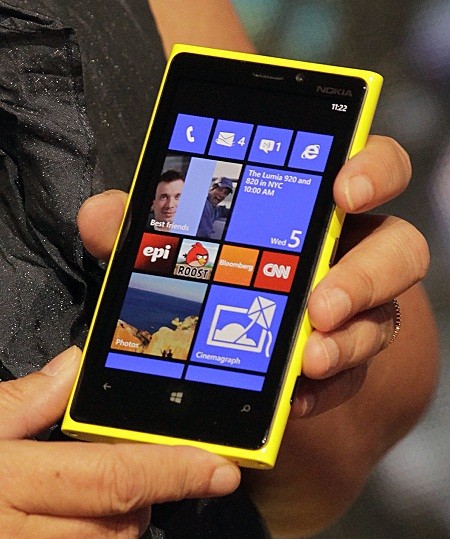 Nokia recently heat up the smartphone race by announcing its new Windows 8 smartphones,Lumia 920 and Lumia 820 on Sept. 5.

However, they did not announce a release date or price.

New information suggests that the Lumia 920 will be coming out really soon.

According to SeekingAlpha, customers now can buy the Lumia 900 with a 2-year contract at AT&T for $10 on Amazon.

"This is incredibly cheap for a high-end smart phone and it shows me that the Nokia 920 will be hitting the shelves sooner than many expect it to do so. When Lumia 900 was introduced in the market for the first time, the users could buy it for $100 as long as they agreed to a 2-year AT&T contract. A few months ago, the company reduced the price to $49, which I personally took advantage of, and now it costs the buyers only $10."

What is considered soon though?

Reports recently revealed that the release date for the Lumia 920 will be early as November.

According to GForGames, Word around the campfire is that Microsoft, Nokia and the US carrier are working diligently in order to make a November 2nd launch possible for the Lumia 920. Microsoft is working hard on finalizing Windows Phone 8 and according to some sources, the upcoming mobile operating system is set for RTM (Release to Manufacturing) next week.

Windows Phone 8 should make its debut sometime in October 29th and meanwhile, AT&T is apparently testing the Lumia 920 in its own labs in order to ensure that a November 2nd launch is possible.

Reuters also said that Lumia 920 will be available in November.

Sources at European telecoms operators recently said that Nokia will start selling its new smartphones in November, according to Reuters.

According to PCWorld, other wireless carriers are staying tight-lipped on whether they'll sell any Nokia phones this holiday season. Verizon tells CNet that it will sell "multiple Windows Phones" in the fourth quarter, but says only that it's having "healthy conversations" with Nokia.

It has rounded edges and colorful covers with a PureView camera and runs on Windows Phone 8.

According to PC Mag, CouponCodes4u.com surveyed 2,371 American smartphone owners between the ages of 18 and 35, and found that most of the respondents liked the look of the new Lumia 920, and were impressed by its specs. However, when asked whether they would consider switching their current cell phone contract to get the Lumia 920, 52 percent of respondents said no.

As for price, according to the Examiner, a reasonable guess for price is that the Lumia 920 and 820 will be $149 and $99 respectively.

Lumia 920 Release Date Set For November; Does it Lack the 'Wow' Factor Against iPhone 5, Galaxy s3?