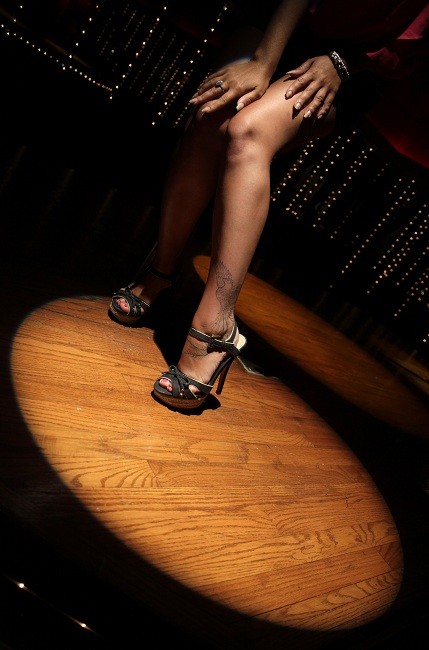 The British author, who's currently on a book tour in the United States, said she's rewriting the first book she ever wrote because she just can't seem to shake the plot line and characters from her mind.

James also let details slip about another book she'd like to write in the future, which the author says gives her a chance at writing in a new genre.

James also revealed on Monday that while she's currently focused on writing new material, she hasn't ruled out writing a fourth book entirely for her hugely-popular "Fifty Shades" series.

James said that when she finished the third book, she felt she had completed the couple's tale, saying "I left them in a really, really good place. But there seems to be lots of people clamoring for a fourth book in the trilogy," said James, whose books have become a publishing sensation, so far selling 31 million copies worldwide.

When asked about a fourth book, she replied, "We'll see."

First, she said, she'd like to complete the other projects, saying, "There's lots of voices clattering in my head."

James made her comments at a media event in New York City where she promoted the release of "Fifty Shades of Grey: The Classical Album," a 15-track compilation featuring classical pieces that inspired her while writing the book, and are referenced in the trilogy. The CD, which includes the "Flower Duet" from Lakmé, Pachelbel's Canon in D and the aria from Bach's Goldberg Variations, comes out today, Sept.18.

According to James, she almost always listens to music while writing. In part because she writes in the living room, and must drown out the sound of her two teenage sons watching television. But also because "music is so expressive (and) it can help set a scene," she said, adding she has a lengthy playlist that she turns to for inspiration.

When it comes to penning steamy sex scenes, james divulged in recent interviews that she likes "Sexy" by the Black Eyed Peas, or Bruce Springsteen's "I'm on Fire." The partnership between EMI Classics and Random House is believed to be the first time that a CD's release has been inspired by a book. Normally, soundtracks are only released in conjunction with films.

Ryan Gosling, Christian Bale, Matt Bomer, Robert Pattinson, and recently, even Justin Beiber, are among many actors' names that've been mentioned in casting the leading role of Christian Grey.

James has been tightlipped on confirming or denying any casting rumors. And while names like David Cronenberg, and Bret Easton Ellis have floated around for director and scriptwriter, as of yet, no one is confirmed.