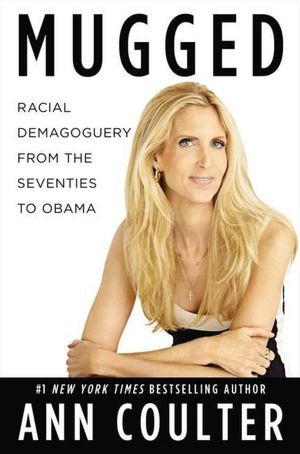 "This isn't a story about black people-it's a story about the Left's agenda to patronize blacks and lie to everyone else," says Coulter in “Mugged.”
(Photo : Barnes & Nobles)

Ann Coulter is back in headlines promoting her new book, "Mugged: Racial Demagoguery from the Seventies to Obama."

The book, published by Sentinel on Sept. 25, is described:

For decades, the Left has been putting on a play with themselves as heroes in an ongoing civil rights move­ment-which they were mostly absent from at the time. Long after pervasive racial discrimination ended, they kept pretending America was being run by the Klan and that liberals were black America's only protectors.

It took the O. J. Simpson verdict-the race-based acquittal of a spectacularly guilty black celebrity as blacks across America erupted in cheers-to shut down the white guilt bank.

But now, fewer than two decades later, our "pos­tracial" president has returned us to the pre-OJ era of nonstop racial posturing. A half-black, half-white Democrat, not descended from American slaves, has brought racial unrest back with a whoop.

The Obama candidacy allowed liberals to engage in self-righteousness about race and get a hard-core Leftie in the White House at the same time. In 2008, we were told the only way for the nation to move past race was to elect him as president. And 53 percent of voters fell for it.

Now, Ann Coulter fearlessly explains the real his­tory of race relations in this country, including how white liberals twist that history to spring the guilty, accuse the innocent, and engender racial hatreds, all in order to win politically.

Coulter has received a lot of criticism promoting her new book.

The political commentator recently appeared on "The View" to promote "Mugged." She ended up going head-to-head with Whoopi Goldberg.

According to WebProNews, Coulter then went on to comment on Joy Behar's accusation that Republicans are "going against blacks" with voter ID laws:

"This is a perfect example of liberals using the label of civil rights to promote a liberal cause they support, i.e. voter fraud. In fact, one of the first states in the Union to pass voter ID bills was Rhode Island which has an eighty five percent Democratic legislature. And who pushed it, a black Democrat in the House and a black Democrat in the Senate."

"I don't think liberals ever cared about black people. Five minutes after the Civil Rights Act of '64 passed, they start calling everything that has nothing to do with black people a 'civil rights issue.'"

That comment sent the stage into an uproar and ended with Whoopi calling bullshit on everything Coulter was saying (which got bleeped out).

Recently, Coulter sparked race debate when saying that "Civil Rights are for blacks."

"Democrats are dropping the blacks and moving on to the Hispanics," Coulter said during a roundtable discussion on ABC's "This Week With Goerge Stephanopoulus."

"I think the way liberals have treated blacks like children and many of their policies have been harmful to blacks, at least they got the beneficiary group right," Coulter said. "There is the legacy of slavery and Jim Crow laws. We don't owe the homeless. We don't owe feminists. We don't owe women who are desirous of having abortions or gays who want to get married to one another. That's what civil rights has become for much of the left."

"No," Coulter responded, "No. I think civil rights are for blacks. What have we done to the immigrants? We owe black people something. We have a legacy of slavery. Immigrants haven't even been in this country."

In "Mugged," USNews.com reported that Coulter said Democrats pretend that Republicans are racist because it's the only way they can win.

"It's the only way this guy got elected and will be re-elected," Coulter says of President Barack Obama. "The theme of 2008 was that it was historic and you're a racist if you don't vote for the first black president. Someone with his youth and lack of experience would not be elected if he was white."

Coulter recently took aim at MSNBC host Chris Matthews during a recent "Fox and Friends" appearance about "Mugged," over Matthew's allegations that Mitt Romney and the Republican party are playing the "race card" in order to get votes. Matthews recently defended those accusations, saying that even people in other countries like Mozambique and Jamaica have personally thanked him for speaking out, according to the Huffington Post.

She also hit out at Rachel Maddow, who she claimed introduces her black guests as "wicked smart" or "special."

"This is not a person that is comfortable around black people," Coulter alleged.

"These are not people who have black friends, who know black people," she continued. "Oh sorry, except for Lawrence O'Donnell and Bill Maher, who date black gals, so they think they're freedom riders."

On Amazon and Barnes & Noble reviews, the book "Mugged" got mostly four and five stars.