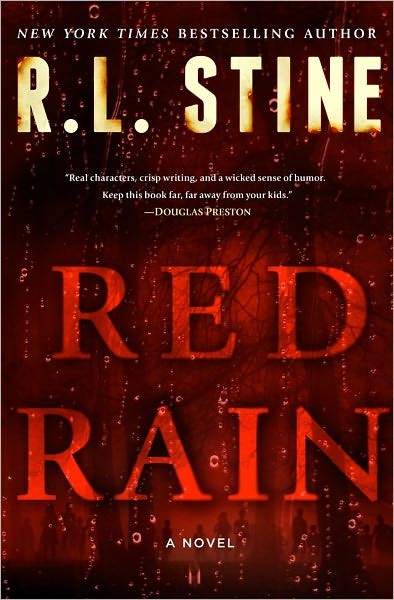 “Red Rain” follows a travel writer, Lea Sutter, into the middle of a devastating hurricane and out again with a pair of evil twins who wreak their own kind of devastation on her family.
(Photo : Barnes & Noble)

Be afraid. Be very afraid. Yet another "children's author" has decided to make the jump from entertaining adolescents to writing for adults. J.K. Rowling made the transition with her newest book, "The Casual Vacancy," and now we can add bestselling "Goosebumps" author R.L. Stine to the growing list. Stine's adult-oriented horror novel, "Red Rain" comes out today.

The author of over 300 novels, Stine has sold an astounding 400 million copies of his books worldwide. Over the last 20 years his "Fear Street" and "Goosebumps" series of books have dominated children's reading lists. At one point, Stine was churning out 12 "Goosebumps" books a year - now he's down to six.

"Red Rain" isn't Stine's first attempt at writing an adult horror novel. He first tried his hand at the genre back in 2000 with "Superstitious," about a professor named Liam O'Connor who is the most superstitious man in the world. Stine's publishers expected a bestseller, but the reception was lukewarm for an author with such a big reputation.

"It was too early to do an adult novel. No one asked about it. ... I've been waiting by the phone for 12 years," Stine said in an interview with CNN.

Now, though, the timing seems just right for another adult horror novel from Stine. The author has reportedly been hounded by fans recently at book signings and his over 60,000 followers on Twitter; the kids who grew up with "Goosebumps" - now adults - are heaping praise on him and requesting Stine to write more "grown up" material.

Stacy Creamer, editor for "Red Rain" as well as the vice president and publisher for Touchstone, knows Stine's work well. Her 10-year-old son devours his books "like crack."

"To see that kind of enthusiasm in my own son, it was easy to see if, you know, someone checked in with him 10, 15 years from now. ... I think he'd be pretty intrigued," said Creamer.

"Red Rain" follows a travel writer, Lea Sutter, into the middle of a devastating hurricane and out again with a pair of evil twins who wreak their own kind of devastation on her family.

When Stine sent Creamer the outline for "Red Rain" the editor couldn't help but feel a little nervous concerning the prospect of another Stine adult novel. Especially one with such a complicated, nuanced plot. But after receiving the finished novel, she says she would have published the book even from an unknown author.

"I knew he had the chops to do it, because I think writers are writers," Creamer said. "But man, he just slammed it."

The book is receiving mixed reviews, but has certainly won some noteworthy praise.

The Huffington Post named "Red Rain" one of fall 2012's best books. Night Owl Suspense gave the book four and a half stars out of five, comparing Stine's writing style to John Saul, Dean Koontz, and Stephen King's early books, and saying it is a "spine-tingling treat for all those who grew up reading R. L. Stine as kids." A sentiment echoed in the Associated Press' review, which called it a "page-turner until the end."

Stine credits his lifelong passion for the horror genre with his copious writing output.

"When I was a kid, there were these great comic books called 'Tales From The Crypt' and 'The Vault of Horror.' They were gruesome. I discovered them in the barbershop and thought they were fabulous. I used to get a haircut every Saturday so I wouldn't miss any of these comic books. I had no hair at all when I was a kid!"

"When I write, I try to think back to what I was afraid of or what was scary to me, and try to put those feelings into books," said Stine.