'Proof of Heaven' by Eben Alexander: A Neurosurgeon's Journey Beyond Convinces Him Heaven Is Real 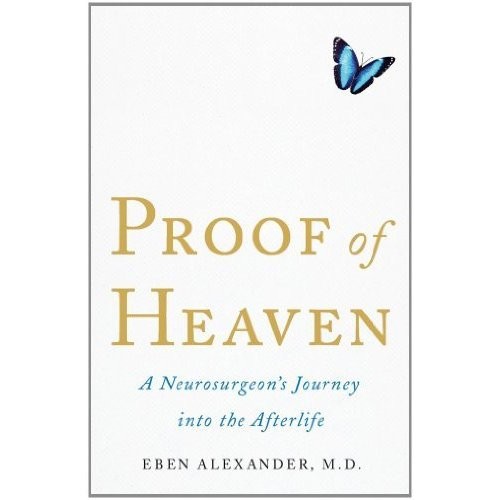 Clearly, Alexander’s story is going to polarize audiences, and stir up controversy. But the book is garnering support from unlikely sources: academics.
(Photo : Barnes and Noble)

Does heaven exist? While science and spirituality aren't the best of friends, "Proof of Heaven," a new book by a neurosurgeon that had a near death experience certainly thinks so.

Author Eben Alexander wants us all to know that he's always been a pragmatist, a man of reason. A successful neurosurgeon, who has taught at Harvard Medical School and other universities, Alexander admits he never believed in the veracity of people's claims of going to the afterlife in near death experiences.

"As a neurosurgeon, I did not believe in the phenomenon of near-death experiences. I grew up in a scientific world, the son of a neurosurgeon," said Alexander in an article for The Daily Beast.

"I understand what happens to the brain when people are near death, and I had always believed there were good scientific explanations for the heavenly out-of-body journeys described by those who narrowly escaped death"

That belief in science and reason would be challenged, though. Alexander, a Christian, claims he journeyed to the afterlife when he slipped into a coma in 2008 after contracting a very rare bacterial meningitis.

"There is no scientific explanation for the fact that while my body lay in coma, my mind-my conscious, inner self-was alive and well. While the neurons of my cortex were stunned to complete inactivity by the bacteria that had attacked them, my brain-free consciousness journeyed to another, larger dimension of the universe: a dimension I'd never dreamed existed and which the old, pre-coma me would have been more than happy to explain was a simple impossibility.

But that dimension-in rough outline, the same one described by countless subjects of near-death experiences and other mystical states-is there. It exists, and what I saw and learned there has placed me quite literally in a new world: a world where we are much more than our brains and bodies, and where death is not the end of consciousness but rather a chapter in a vast, and incalculably positive, journey."

It's a cliché, sure. But that's also what makes it such a universal question.  Everyone, since the beginning of time, no matter their spirituality or lack thereof has pondered the existence of an afterlife. Alexander no longer questions heaven. He knows he's been there.

He describes heaven for The Daily Beast:

Toward the beginning of my adventure, I was in a place of clouds. Big, puffy, pink-white ones that showed up sharply against the deep blue-black sky.

Higher than the clouds-immeasurably higher-flocks of transparent, shimmering beings arced across the sky, leaving long, streamerlike lines behind them.

Birds? Angels? These words registered later, when I was writing down my recollections. But neither of these words do justice to the beings themselves, which were quite simply different from anything I have known on this planet. They were more advanced. Higher forms.

A sound, huge and booming like a glorious chant, came down from above, and I wondered if the winged beings were producing it. Again, thinking about it later, it occurred to me that the joy of these creatures, as they soared along, was such that they had to make this noise-that if the joy didn't come out of them this way then they would simply not otherwise be able to contain it. The sound was palpable and almost material, like a rain that you can feel on your skin but doesn't get you wet.

Alexander says that he traveled through heaven, surrounded by "millions of butterflies," accompanied by a mysterious woman. The woman gave him three messages: "You are loved and cherished, dearly, forever"; "You have nothing to fear"; "There is nothing you can do wrong."

Clearly, Alexander's story is going to polarize audiences, and stir up controversy. But the book is garnering support from unlikely sources: academics.

"Dr. Eben Alexander's near-death experience is the most astounding I have heard in more than four decades of studying this phenomenon," reads a review from Raymond Moody, M.D., Ph.D., author of "Life Beyond Life." He goes on to say that the "circumstances of [Eben's] illness and his impeccable credentials make it very hard to formulate a mundane explanation for his case."

"[The book] is more than just an awe-inspiring account of a profound encounter with spiritual reality," said Bruce Greyson, MD, Carlson Professor of Psychiatry & Neurobehavioral Sciences, University of Virginia School of Medicine.

"Dr. Alexander's neuro-science career taught him that near-death experiences are brain-based illusions, and yet his personal experience left him dumbstruck.  His honest struggle to make sense of this unforgettable journey is a gripping story, unique in the literature of spiritual experiences, that may well change how we understand our role in the universe."