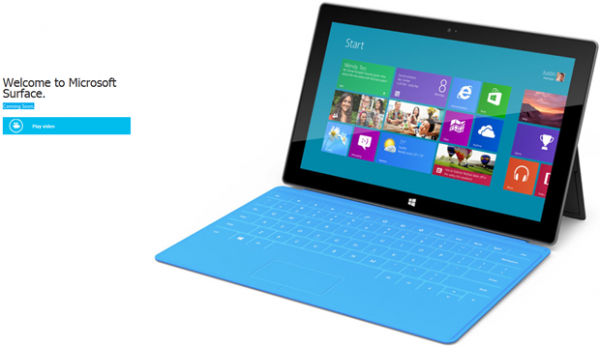 You've scribbled the flashy new features in your diary for safe keeping, and drooled over the simple yet sleek design concepts for months, but how does Microsoft's first ever tablet, the Surface RT, really fare? If early reviews are any indication of larger trends to come, Microsoft is in for a rough winter.

Microsoft won't officially release the device until Oct. 26 at Midnight and the Surface RT is already polarizing consumers. Early reviews of the device have been mixed, and that's being kind. Aside from Microsoft acolytes who will praise the company no matter its failings, most reviews seem to agree that while the design is aesthetically pleasing, and the hardware is impressive, there's a serious lack of software.

Much of this may have to do with the fact that this first surface runs Windows RT, not Windows 8, and those are two very different beasts. Windows RT is designed for a different chip, not "Intel Inside," and will not be able to run all existing Windows applications.

The company has spoken volumes on Windows 8's impeccably touch-screen friendly qualities, but users won't even be able to try these flashy features out for themselves on a Microsoft tablet for another three months. Many of the features consumers have been drooling over won't be available with the Surface RT. They will only be available on the more expensive Pro model to be released in 2013.

Windows RT is designed to run with the types of ARM-based processors used on other tablets and smartphones. Apps need to be specially written for Windows RT, which means the first Surface tablet can't completely tap into the same, vast universe of Windows developers that Microsoft commands.

"Consumers will expect something that it doesn't really deliver," Sarah Rotman Epps, an analyst with Forrester Research, said in an interview.

The Windows RT tablet represents the first major break in the company's long partnership with chip company Intel Corp. The device uses an Nvidia Corp processor that is based on designs licensed from ARM Holdings PLC.

The main software with the Surface and Window RT is called "Microsoft Office Home and Student 2013 RT Preview" that includes a version of the Word, PowerPoint, Excel and OneNote programs. The next version of the tablet, called Surface with Windows 8 Pro, will have an Intel chip and will run Windows 7 applications, just as most standard PCs.

"My view is that Windows RT is not really going to be satisfying to consumers," said Rotman Epps.

Titling its review "Technological Heartbreak," Gizmodo sincerely wanted to love the Surface RT, but just can't bring itself to recommend it.

"It's been just as long a time since a gadget has been so disappointing. Surface is good, but Surface RT sure isn't the future. Not yet."

But there were some things to like. "Surface is handsome. You'll appreciate it every time you pick it up and turn it on. It's a simple, joyful experience."

"Browsing in Internet Explorer is just as easy a flopping into a couch-cushion Netflix marathon, or working in the full Microsoft Office suite. It all feels seamless, natural, a culmination of useful things... This is what netbooks were supposed to be, before we realized they were all completely horrible: small, powerful, flexible, skinny computers that can do a ton of things easily."

"Surface is a fantastic promise, and holds fantastic potential. But while potential is worth your attention, it's not worth your paycheck. Surface RT gets so many things right, and pulls so many good things together into one package. But it is undercooked."

"After the initial delight of an evolved tablet wears off, you'll groan-because Surface brings the appearance of unity, but it's really just the worst of both worlds. Instead of trading in your laptop and tablet for Surface, a cocktail of compromises that fracture the whole endeavor, you'll miss them both urgently."

"It's Windows on Surface RT that's the greatest letdown of all, the lethal letdown, because it's not Windows 8, but Windows RT. You can't tell the difference by looking at them, but you certainly will once you use it. Windows RT is underpowered (everything opens and syncs slightly too slowly), under-functional (you cannot install a single app that's not available through the Windows RT app store, which offers a paltry selection), and under-planned (the built-in apps can't feel like Lite versions of something better)."

"In the end though, this is nothing more than Microsoft's tablet. And a buggy, at times broken one, at that, whose "ecosystem" feels more like a tundra."

Despites its high price and software shortcomings, ZDNET loves the device. We're guessing they're either on the Microsoft payroll, or legitimately want to marry the Surface in a candlelit commitment ceremony.

"For a first-generation product, the Surface with Windows RT is astonishingly polished. It's not a replacement for a full-strength PC, but as a companion device that offers light weight, excellent entertainment options, and the ability to use full-featured Office apps, it's irresistible."

"I also expect the ecosystem around the Surface, notably productivity apps, to improve by leaps and bounds in the next year or so. This is a product that will get better with age. Enthusiastically recommended."

In its exhaustive review, The Verge's big complaints centered on the Surface's bulky size, inferior display quality, and false promises.

"The Surface seems to desperately want to be docked and on a desk or table rather than in your hands or on your lap. After using it for an extended period of time, it's hard to imagine bedtime reading or casual throw-it-in-a-bag use for this device."

"In comparison to a new iPad or Nexus 7, the device seemed bulky, awkward, and just plain heavy. That's especially telling considering that the thickness and weight of the Surface and the iPad are nearly identical - those extra inches matter."

"Overall, Microsoft has designed a beautiful tablet that's unfortunately more functional as a laptop... on a desk. The styling and components are incredibly well made and high quality, but the form factor isn't svelte or small enough to really come across as a true hybrid."

"The colors and blacks on the 10.6-inch screen do look stunning, but all the technology in the world can't make up for pixels that aren't there. At the size of the Surface screen, 1366 x 768 resolution leaves much to be desired - and even though things are sharp, text and some of the starker elements of the Microsoft's new UI would clearly benefit from a higher res display."

"The Surface does not seem like a better tablet than the iPad or the Nexus 7 (the two best products in the category as of this [writer]). Even though it has a very unique and useful interface, and lots of hooks into Microsoft's ecosystem, it still lacks the polish and apps of those two devices."

"The promise of the Surface was that it could deliver a best-in-class tablet experience, but then transform into the PC you needed when heavier lifting was required. But that's not what the Surface offers, at least not in my experience. It does the job of a tablet and the job of a laptop half as well as other devices on the market, and it often makes that job harder, not easier. Instead of being a no-compromise device, it often feels like a more-compromise one."

With Apple expected to release its new iPad Mini Nov. 2, and Google widely rumored to release a new 32GB version of its hugely popular Nexus 7 tablet on Oct. 29, the choices in the tablet market are only beocming increasingly clouded, especially considering the avalanche of negative Surface reviews. You have to question Microsoft's strategy of releasing the RT seperately. As the public's introduction to how the company makes a tablet, it seems a poor first impression given the word circulating around the Internet.

That means they are among the biggest tablets in the market. If you are not satisfied with the typical 10.1-inch tablet, you can go for the Surface tablet. Along with the touch keyboards with the device, you can turn the machine to a small notebook.

The Surface tablet comes with five Touch Covers. Different from typical keyboards, the Surface keypads provide a smoother typing experience thanks to their touch-based surface.

The Surface tablets mount both front and rear cameras. The front camera, named life cam by Microsoft, makes the tablet ideal for video chatting through Skype or other services. Using the rear camera, you can capture images and video clips.

Microsoft puts forward better memory options with the Surface tablets. The device comes in 32GB, 64GB and 128GB options. The 128GB is available only with Surface Pro. Further, you can expand the memory using external memory sticks thanks to microSD card slot. That is, you can store enough data including music, software items and video in external clips.

The 3mm Touch Cover can be connected to your Surface tablet with a single magnetic click, so, now you can type text and send messages quite easily.

The Surface's tablet housing features a revolutionary kickstand. Along with fully functioning keyboard and track-pad, the integrated kickstand helps you place the gadget in both portrait or landscape modes.

According to Bloomberg, Surface will only be able to go online using a short-range Wi-Fi connection. This is a stark contrast to Apple's iPad 3, which has a 3G option, and a faster LTE connection.