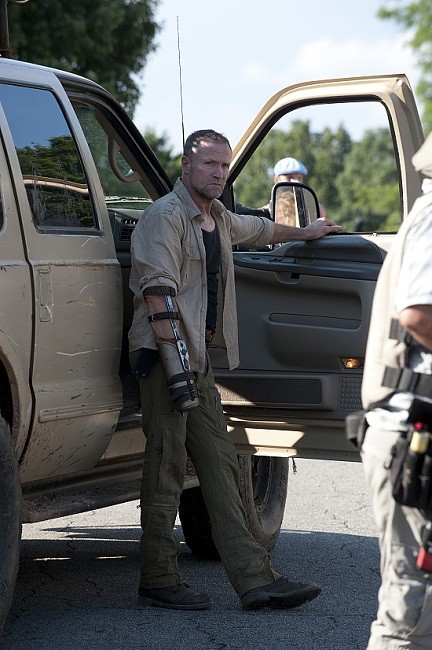 The latest season of AMC's hit horror series "The Walking Dead" has not been coy: Season three aims to find every character's limits, and gnarl through them like a walker that just heard the dinner bell ring.

The first three episodes of the third season have pushed "The Walking Dead" to higher highs and lower lows, finding a slick, but tenuous balance between fits of trenchant gore, shocking atrocities, and fleeting glimpses of humanity.

After two seasons spent in the frightening new wilderness, this season looks to be the coming-of-age story for the series, and its characters; Rick's son, Carl, embodies this maturation.

The group has gained, and lost members, and finally found another solid location to hold up in in the prison after being forced to abandon Hershel's farm in the season two finale. "The Walking Dead" has successfully established its own real world, with its own unique set of rules. So far, season three looks to be about exploring those new boundaries, and learning the consequences as each character discovers - sometimes, literally - what they're made of.

Based off the monthly black-and-white comic book series written by creator Robert Kirkman, "The Walking Dead" follows a gang of lost souls just trying to survive day-to-day life in a post-apocalyptic U.S. overrun with the living dead. The first two seasons of the AMC series have been hugely successful; the season two premiere broke cable ratings records in the 18-49 demographic. But season three has shattered everyone's expectations for the show, ratings and otherwise.

The premiere episode for the third season of AMC's "The Walking Dead" broke ratings records for the network with nearly 11 million viewers. Episode two, "Sick," which ran on Sunday Oct. 21, pulled in another 9.5 million fans, topping all non-sports programs for the week, and cementing "The Walking Dead" as the hottest TV series for the coveted 18-49 demographic so far this fall.

With DISH Network now once again carrying AMC, there are 14 million more users who can now watch "The Walking Dead." AMC airs a new episode of the series three times on Sunday night.

With episode three revealing Merle's return to the series, it's only natural to wonder if Kirkman and co. plan to reunite him with his brother, Daryl, who's proved to be an integral part of the show's core group.

"After knowing that I was actually going to be back, I was wondering when, so yeah, [it's good to be back]," admitted Michael Rooker at a press conference for the series.

"I returned for that scene in Season 2, when Daryl was in that delusional state. That poor kid was going to meet his maker and he didn't have the balls to get up and climb that mountain, so he had to bring back his brother in his own mind to kick his ass and give him a little tough love and tell him to get his butt up before I kick his teeth in. That was a fun scene. I saw it as a very positive scene, but a lot of people saw it like, 'Dude, he's so mean to his brother!' I was like, 'What are you talking about?! He's dying, and he brings his own brother back, in the delusional state that he's in, to motivate him and save his life.' It was a very, very positive delusion."

A brutish, drug-loving racist, to call Merle a complicated man would be a gross disservice to his character's complex development. He feels like a real guy, with very real flaws, and weaknesses, and that's partly why Rooker likes playing the role.

"Merle is very likable. What do you mean, 'Do I like Merle?' How can you say that? Merle is likeable. I love Merle! Merle isn't a bad guy. He's just tough and a little bad, at times," said Rooker.

Many viewers were shocked to see Merle return to the series after he unceremoniously exited in season one when Rick left him for dead chained to a pipe on a rooftop in downtown Atlanta.

"Once I found out [that I would be back], we did prosthetic molds of my arm. So, I knew what it was going to look like, but I didn't really know if it was going to work or not. As it stands now, it works pretty good, and it's a good thing to have, in the apocalyptic era of our existence.

The prosthetic hand took some getting used to for Rooker.

"At first, it was a bit odd. Now, when I reach to shake hands, even when it's off, I reach to shake with my left hand and people are like, 'No, we do it with the right hand, idiot!' I'm a very hands-on guy, anyway. I'll come up and hug you, slap you on the back, or grab you and shake your hand. I'm a very physical guy. So, when I only do it with one hand, it's odd."

While Merle's time on the series had been limited to just a few episodes until his return in season three, he's become an undeniable fan favorite.

"Merle made a major impact on this show. It was quite interesting. Nobody knows when that's going to happen. You just do your work and do it the best you can. If it happens, it happens. If it doesn't, it doesn't. But, it's awesome!" revealed Rooker.

"The day we did that four-minute monologue scene, right before Merle cuts his hand off, that was just me, on the roof when it was 115 degrees, literally sweating my ass off and dying up there, and everybody was into that. That was real sweat. We did maybe three or four takes, and we were done. We had so many cameras at different angles, so we didn't have to do the customary moving cameras in, closer and closer. We switched it three or four times, and we did it all the way through, from the first word, all the way to the end, without any cuts. We did only three or four takes, but took all morning to do it. And after every take, there was a standing ovation by every crew member, so it was really cool. Actors don't usually get that on a film set."