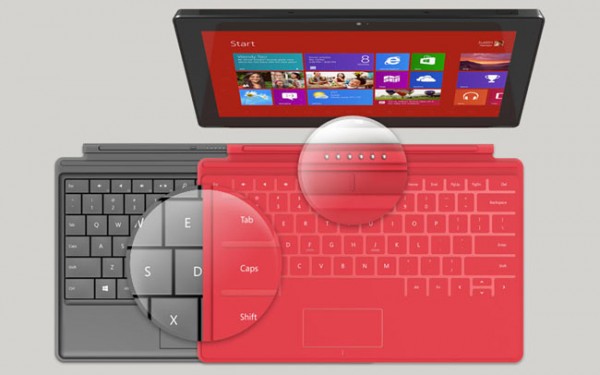 Some users on Microsoft Surface Forums have reported that the Touch Cover splits at a seam near where it magnetically connects to Microsoft's Surface tablet.
(Photo : Microsoft)

The Touch Cover to Microsoft's first ever tablet, the Surface RT, suffers from a crucial defect. Or does it?

Some users on Microsoft Surface Forums have reported that the Touch Cover splits at a seam near where it magnetically connects to Microsoft's Surface tablet. One user in that forum, "Br1an_g," said that the cover "in the middle at the join to the screen is peeling," adding that it appears the "top layer has come loose and is ruffling up." Other users echoed similar complaints about their Touch Covers.

According to the Guardian, the first to cover the issue, Matthew Baxter-Reynolds, a Windows developer, has also complained of the problem.

The Touch Cover for Microsoft's Surface tablet, which the company sells for an extra $100 and hyped almost as much as the tablet itself, works as a stand, screen protector, and keyboard.

However big the problem really is, Microsoft appears willing to address any defects in its Touch Cover. Users in the Surface forums reportedly contacted Microsoft regarding the issue and the company is giving them a replacement cover. Of course, whether or not these new covers address the ripping issues with the previous design remains unclear. 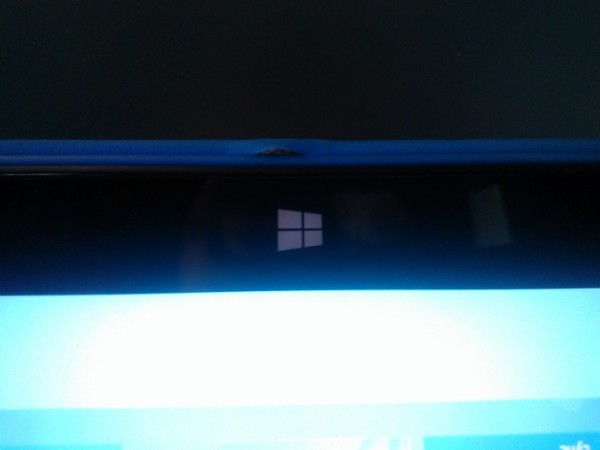 (Photo: Microsoft Surface forums) An example of the defect some users have experienced with their Touch Covers; the "rip" users are complaining about is in the middle of the seam, where the touch cover attaches to the tablet.

A Microsoft representative said the company is aware of the issue and those affected should contact Customer Support for help, the company said in an e-mailed statement to CNET.

"Microsoft makes every effort to ensure our customers receive a high quality product," the spokesperson told CNET. "We are in active contact with our Customer Support operations and are aware of a small number of instances of material separation. Customers can contact Microsoft Customer Support if they have any questions."

With no way of possibly knowing how widespread the defect issues really are, is this just another case of latching onto an issue only affecting a minority and blowing it out of proportion?

Since CNET, BusinessInsider, The Guardian, and other news sources have picked up the story, Surface Forum members have accused news sites of sensationalizing the issue.

One Surface forum user who experienced a similar problem with their Touch Cover, expressed concerns the media would blow the story out of proportion.

"All this aside, I have to emphasize that I think the Surface, with the Windows 8 live tile interface, is a technological generation ahead of iOS and Android. I'm extremely satisfied with the device and would never think of exchanging it for any other tablet," said a user using the handle Surface.

"Let's hope we don't get quoted out of context again by some in the media that lift our posts," the user presciently added.

Another forum member, "pbanky," accused CNET of just that.

"Since CNET seems desperate to find things outside of Apple to report on, I wanted to clarify with anyone coming to this thread from the CNET article that this issue was announced by a whopping TWO people," said pbanky.

"Yes, two people experiencing a hardware issue with a Microsoft product is apparently news worthy. I have never been happier with a tablet/computer purchase in my life. Thank you, CNET, for driving people to this community so they can see how happy Surface customers are.

That means they are among the biggest tablets in the market. If you are not satisfied with the typical 10.1-inch tablet, you can go for the Surface tablet. Along with the touch keyboards with the device, you can turn the machine to a small notebook.

The Surface tablet comes with five Touch Covers. Different from typical keyboards, the Surface keypads provide a smoother typing experience thanks to their touch-based surface.

The Surface tablets mount both front and rear cameras. The front camera, named life cam by Microsoft, makes the tablet ideal for video chatting through Skype or other services. Using the rear camera, you can capture images and video clips.

Microsoft puts forward better memory options with the Surface tablets. The device comes in 32GB, 64GB and 128GB options. The 128GB is available only with Surface Pro. Further, you can expand the memory using external memory sticks thanks to microSD card slot. That is, you can store enough data including music, software items and video in external clips.

The 3mm Touch Cover can be connected to your Surface tablet with a single magnetic click, so, now you can type text and send messages quite easily.

The Surface's tablet housing features a revolutionary kickstand. Along with fully functioning keyboard and track-pad, the integrated kickstand helps you place the gadget in both portrait or landscape modes.

According to Bloomberg, Surface will only be able to go online using a short-range Wi-Fi connection. This is a stark contrast to Apple's iPad 3, which has a 3G option, and a faster LTE connection.