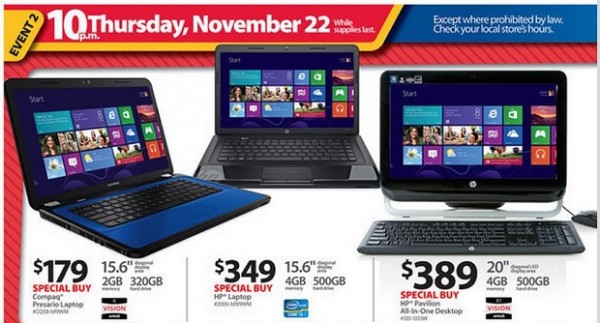 As the perfect storm of savings approaches, retail giants like Walmart, Target, and Best Buy continue to "leak" their holiday shopping deals ahead of the official start of Black Friday. Here's a compilation of some of the best deals you'll find in stores and online for tablets, laptos, HDTVs and more.

Walmart's doorbuster deals start at 8 p.m. on Thanksgiving night, Thursday Nov. 22, for "family-oriented products." Other sales start at 10 p.m., including an extremely cheap Compaq Presario Windows 8 laptop with AMD processor, 2GB of RAM, and a 320GB hard drive for $179.

As usual, there's no real discount for Apple's iPad, but Walmart sweetens the deal by offering a $75 gift card if you purchase a $399 iPad 2 in store. If you're looking for a tablet at a rock-bottom price, Walmart is also selling an 8GB Barnes & Noble Nook Color tablet for just $99, and an 7-inch Ematic Android tablet with 4GB of storage will be available on Walmart.com for a mere $49 all Thanksgiving day.

Walmart is enticing Black Friday customers this year with a unique promise: every customer in the store or online between 10 p.m. and 11 p.m. on Thanksgiving will be able to buy three special electronics items at unheard of prices. Walmart has even guaranteed stores have enough inventory to fit the demand.

If you are in the store or on their website shopping by 10 p.m. you are guaranteed these sale items.

If by chance the store runs out of the inventory, Walmart will deliver the device to a local store for you if you register for the item online.

A few other highlights from this year's Black Friday flyer

Nintendo's Wii console on sale for $89

Dolls Barbie, Bratz and Disney Princess dolls, on sale for $5 each.

The Black Friday sales start at 5 a.m. on Black Friday morning, but the store will remain open from 8 p.m. the night before.

Target continues to start the holiday shopping season earlier every year, and will open  its doors three hours earlier than in 2011, at 9:00 p.m. on Thanksgiving.

"We thought long and hard about when the right opening time would be," said Kathee Tesija, Target's executive vice president of merchandising in a press release. She said that 9:00 p.m. struck "a perfect balance" for its customers.

During Target's early opening, the retailer plans to offer deals that include an Apex 32-inch LCD TV for $147 and a Nikon digital camera for $99.99. From 4:00 a.m. to noon Nov. 23, customers who spend $50 or more on clothing, accessories or home products will earn a $10 Target gift card to use toward a future purchase. Target is also preparing additional early morning specials, including Leapfrog Explorer software for $15.

Doorbuster deals for Target's Black Friday guests will provide some of the season's biggest savings. The sale will take place in stores and on Target.com from Thursday to Saturday, Nov. 22 to 24. Sale offers are valid until supplies last with no rainchecks.

Some of Target's best Black Friday deals include:

Black Friday guests shopping in Target stores will have even more ways to save beginning at 4 a.m. on Nov. 23. Until noon that day, guests who spend $50 or more on apparel, accessories or home products will earn a $10 Target GiftCard to use toward a future purchase.

Or, if you'd rather shop without earning the battle scars to prove it, Target.com will have exclusive, online-only discounts beginning Thanksgiving Day on many of the season's top gifts and early access to select Black Friday doorbuster deals.

Target requires that you be a REDcard cardholder to gain access to its early Black Friday deals. REDcard holders who have previously signed up for emails or signed up to manage their accounts online will have exclusive access to 20 of the Target.com deals on Wednesday, Nov. 21, including:

Aside from early access to its online Black Friday sales, Target also offers all REDcard members 5% off online and in-store, and free shipping on all orders.

Target will offer extended store hours throughout the holiday season for guest convenience. Store hours on Thanksgiving and Black Friday, Christmas Eve and the day after Christmas will be as follows:

Best Buy's 22-page preview - just a sliver of what's to come, the company promises - includes deals on everything from big-screen TVs and laptops to smartphones and tablets.

Doorbusters will be available once Best Buy stores open at midnight Thanksgiving night, to get the deals and in-store discounts, customers will need tickets, which will be handed out up to two hours before a store's midnight opening.

There's also a Samsung laptop bundle for $349.95 that includes a carrying case, wireless mouse, and security software, though no details about the notebook's specs have been given.

The preview also has a page of Apple deals, although, as several sites have noted, these appear to be the usual 10-percent off deals Apple always offers on Black Friday. You can get $40-$60 of savings off full-sized iPads (both the iPad 2 and the new iPad with Retina Display) or a 13.3-inch MacBook Air is $1,199.99 before $175 worth of savings.