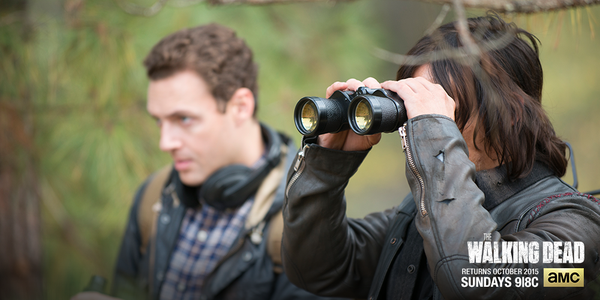 With the fifth season of "The Walking Dead" done, spoilers and much guesswork about season six of the show have already begun sprouting all over the Internet.

Among the most highly-speculated are the possible characters from the comic books that are most likely to make their debut on the AMC series. Here are some of the comic book characters that fans could watch out for in the upcoming season.

Derek is known to the fans of the comic books as the leader of a group called The Scavengers. He is snide and can even be scheming. As the leader of the group, Derek was shown to have complete and total control of his members. He has complete distrust and a serious dislike for the people of Alexandria, and will do whatever it takes to be part of the group, and eventually take over the Alexandria Safe-Zone as well.

Why he should be in the show: Derek can be a good antagonist to the show, and he delivers snarky one-liners that TV fans would love.

Negan is the head of the group known as The Saviors, and may just well be the villain audiences will love to hate. He is one big tough guy who terrorizes and schemes neighboring communities in exchange for "protection" (hence, the name of their group). His weapon of choice is a barbed-wired baseball bat and he does not think twice in using it for the sake of his own.

Why he should be in the show: Because of the next character in the list. And the show could always use another villain.

Dwight, who is also part of The Saviors, is introduced in the comic books as Negan's loyal right-hand. But there's more to Dwight than just being a crossbow-wielding man. Dwight's backstory has the familiar edge that viewers would love, and is the type of character whose past is intriguing enough to sustain the storyline.

Why he should be in the show: His half-burnt face is both visually appealing and terror-inducing -- all at the same time.

Little is known about the past of the character who goes by the name of Jesus. His real name is Paul Monroe, but he is known to many as Jesus (perhaps because of his hair). He is a survivor in many ways, and his past experiences honed his combat skills, made him a wise tactician and gave him the ability perform amazing human feats. In the comic books, Jesus gains Rick's trust, and uses his intelligence to come up with plans to save the group.

Why he should be in the show: He is both cool and smart, and that hair can be incredibly sexy for female fans.

Ezekiel got his name because he believes that he is the king of his own kingdom, aptly named "The Kingdom." Though he is not exactly the ideal leader, he strives his best to do what is right for his people. In the comic books, Ezekiel finds himself at odds with the Saviors, and allies with Jesus and Rick.

Why he should be in the show: Ezekiel has a pet tiger, who is more than willing to devour zombies and humans alike. Enough said.